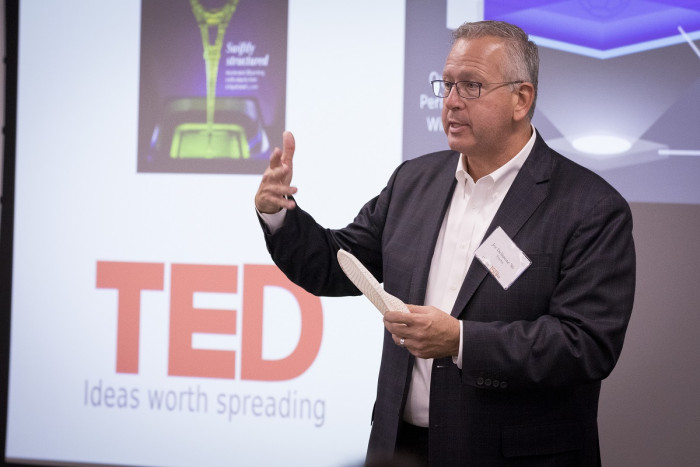 HomepageNewsDeSimone to Donate Portion of National Prize to Ursinus for IDC

DeSimone to Donate Portion of National Prize to Ursinus for IDC

Recognized for making significant advances in convergence research, Joe DeSimone ’86 is providing generous support to the Innovation and Discovery Center.

DeSimone is the recipient of the 2018 National Academy of Sciences Award for Convergent Science. The $350,000 prize recognizes significant advances in convergence research—the integration of two or more of the following disciplines: mathematics, physics, chemistry, biomedicine, biology, astronomy, earth sciences, engineering and computational science—for achievements possible only through such integration.

“Funding from the prize helps call attention to new and exciting technologies that we can use to advance human health here and around the world. We’ve made arrangements for these funds to be used to facilitate institutional programs that foster and support convergent approaches, including donations of all of the proceeds to The Institute for Convergent Science at Carolina and the Innovation and Discovery Center at Ursinus College, my alma mater,” DeSimone told the University of North Carolina at Chapel Hill’s University Gazette.

DeSimone is CEO and co-founder of Carbon, a leading digital 3D manufacturing company. He is globally recognized for his achievements in developing and commercializing advanced technologies in several cutting-edge fields such as 3D printing, precision medicine, nanoparticle fabrication and green chemistry.

In October, he was a guest speaker and presenter at Ursinus’s Innovation and Discover Center grand opening, where he touched on the themes of the power of innovation and convergence.

“Solutions to some of the most complicated problems we have today involve disciplines coming together,” he said at the IDC dedication. “We do that well here at Ursinus, where a broader contextual understanding—a quest—happens. That’s where the frontier is now.”