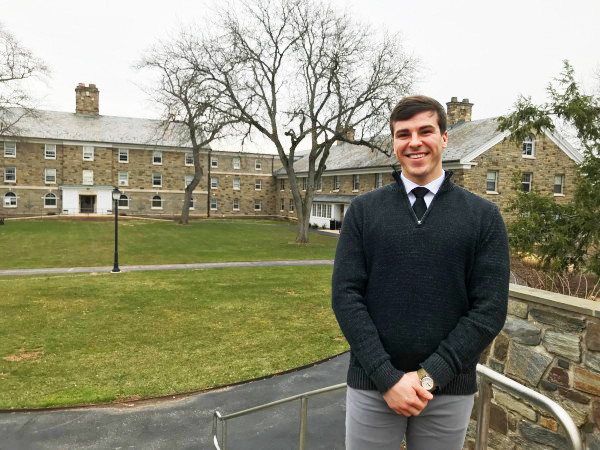 Jason Bennett ’19, of Allentown, Monmouth County, N.J., is the twelfth Ursinus student to be awarded the distinctive scholarship since 2007. He will study theoretical high-energy physics at the University of Groningen.

The world’s largest and most diverse international educational exchange program, the Fulbright Program is devoted to increasing mutual understanding between the people of the United States and the people of other countries.

Bennett, president of the Society of Physics Students at Ursinus and a former president of Active Minds, a student-run mental health awareness, education and advocacy group, says he will be conducting research under Eric Bergshoeff, a professor of theoretical high-energy physics at Groningen, as well as under Bergshoeff’s graduate students and post-doctoral researchers. He’ll be there from August 2019 to June 2020.

“The blending of mathematics and physics in Dr. Bergshoeff’s work is something I’ve really come to appreciate,” says Bennett, who majors in both physics and mathematics at Ursinus. “I’ve found theoretical high-energy physics to be one of the places that both disciplines meet, and I am so excited about this opportunity to continue to conduct research on that border.”

“It’s so important to take advantage of your professors’ expertise,” Bennett says. “All research is good research, and at Ursinus, we have so many opportunities to learn how to be good researchers, be that through research during the academic year, through Summer Fellows, or even through independent studies. By making use of all these resources, I’ve been able to dive much deeper into the research topics that interest me, and I’ve realize how interconnected they are. It’s allowed me to look into the underlying mathematical structure of some of the physics topics that interest me.”

After his Fulbright experience, Bennett plans to apply to graduate school and then go from mentee to mentor and teach a new generation of student researchers.

“I would really like to be a professor at a research university or a liberal arts college,” he says. “I like teaching physics. Being a teaching assistant and a tutor here is something I’ve really enjoyed.”

In a letter of acceptance, J. William Fulbright Foreign Scholarship Board Chair Jeffrey Bleich wrote to Bennett, “Your grant is a reflection of your leadership and contributions to society.”

Many distinguished Fulbright alumni have gone on to become heads of state, judges, ambassadors, cabinet ministers, CEOs and university presidents, as well as leading journalists, artists, scientists and teachers. They include 59 Nobel Laureates, 82 Pulitzer Prize winners, 72 MacArthur Fellows, 16 Presidential Medal of Freedom recipients and thousands of leaders across the private, public and non-profit sectors.

Since its inception in 1946, more than 380,000 Fulbright award winners have participated in the program. —By Ed Moorhouse