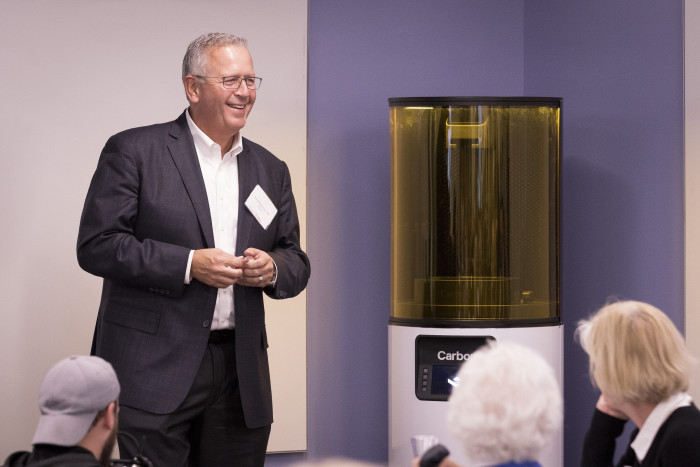 HomepageKeep the PromiseUrsinus to Recognize Entrepreneur Joseph M. DeSimone ’86 for Leadership and Service

He will be honored at Bear2Bear Benefit & Bash, which raises money to support students facing temporary financial hardship.
October 16, 2019

DeSimone will be honored during the college’s second annual Bear2Bear Benefit & Bash, which raises funds to support the Bear2Bear Student Emergency Fund. The fund provides special grants of up to $5,000 to students who are facing temporary financial hardship as a result of an emergency or crisis situation.

In that spirit, the Impact Award recognizes distinguished individuals or organizations who have had an extraordinary impact on their local, national or global community through exemplary leadership and service and have been unparalleled supporters of Ursinus College and its mission.

“Joe DeSimone has been a tireless advocate of Ursinus College and its students, and his professional accomplishments capture the spirit of the college’s entrepreneurial-minded liberal arts mission. His achievements and contributions to society have changed the world for the better, as have the innumerable ways he has given back to Ursinus. We’re honored to present him with the Bear2Bear Impact Award for Leadership and Service,” Ursinus President Brock Blomberg said.

As co-founder and executive chairman of Carbon, DeSimone also maintains academic affiliations as the Chancellor’s Eminent Professor of Chemistry at the University of North Carolina at Chapel Hill and the William R. Kenan, Jr. Distinguished Professor of Chemical Engineering at North Carolina State University. He is globally recognized for his achievements in developing and commercializing advanced technologies in several cutting-edge fields such as 3D printing, nanoparticle fabrication, medical devices and green chemistry.

Last year, he committed a portion of his National Academy of Sciences Award for Convergent Science to Ursinus College to support its Innovation and Discovery Center (IDC). The IDC, which opened in fall 2018, brings together scientific, entrepreneurial and policymaking research.

The Bear2Bear Student Emergency Fund was initiated by Will Abele ’61, a valued Ursinus alumnus and member of the Ursinus Board of Trustees. Abele and his wife, Joan, were honored with the first Bear2Bear Impact Award for Leadership and Service in 2019.

In addition to money raised at the Bear2Bear Benefit & Bash, the fund is supported through generous donations from members of the Ursinus community. The first grants were awarded during the spring 2018 semester.

Jill Leauber Marsteller ’78, P’18, senior vice president for advancement, said that due to the success of the program, in addition to an increased institutional and donor commitment to the Bear2Bear Fund, a portion of it will also be allocated to completion grants. These grants are designed to provide students who are in extreme financial situations with additional resources to help them graduate from Ursinus. The shift will allow Ursinus to more effectively respond to the financial needs of its students, engage donors more robustly and increase graduation rates.

“The Bear2Bear Student Emergency Fund is a critical resource that will allow us to continue to assist students and fulfill our goal of making an Ursinus education accessible to all students,” Marsteller said.

Nominations for the Bear2Bear Impact Award for Leadership and Service are made by Ursinus College alumni, parents, faculty, staff and friends of the college.