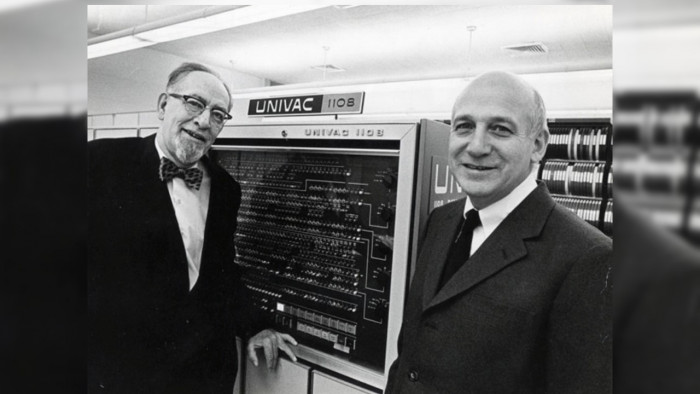 On February 15, 1946, Ursinus Professor of Physics John Mauchly and University of Pennsylvania Professor J. Presper Eckert unveiled their invention to the public: ENIAC, the first modern computer. Historians, engineers, and tech aficionados are celebrating its creation in a weeklong series of events.
February 15, 2021

Tom Avril wrote, in a Philadelphia Inquirer article, that ENIAC (which stands for Electronic Numerical Integrator and Computer, and is pronounced as ENNY-ack, not EE-nyack) was “a room-sized contraption made of switches, cables, and 18,000 glass containers called vacuum tubes.” It was born from Mauchly’s quest to predict the weather.

In the late 1930s, Mauchly hired Ursinus students to crunch data from the measurement of sunspot activity, but he soon saw that the task was beyond human skill, his daughter, Gini Calcerano, told Avril.

“He quickly realized: ‘There’s not enough time in the rest of the history of the earth to calculate all the data I need,’ she said.”

“Mauchly wondered whether the task could be accomplished by some sort of calculating device, and signed up for a course at Penn in the new field of electronics,” wrote Avril. “The lab instructor was J. Presper Eckert, and the two hit it off, forming a partnership that would eventually result in ENIAC.”

Their first project, at the request of the Army, was not for weather, but for weaponry, to calculate the angles for firing artillery during World War II.

“Calculating the trajectory for just one set of conditions — wind speed, humidity, temperature, and terrain — took 40 hours by hand, using differential calculus. The task was entrusted to 100 women with math backgrounds, who were called ‘computers.’” Among them was Kathleen McNulty, a onetime math major from Chestnut Hill College who would go on to marry Mauchly.

“By using a mechanical device called the differential analyzer, they could whittle the calculating time for one trajectory below an hour, but that was still too slow during wartime. Yet despite the relentless efforts by Mauchly, Eckert, and their team, ENIAC was not finished until after the war was over.” McNulty was one of six human computers chosen to make it run.

Calcerano will share stories of her parents at one of this week’s commemorative events. The full list of events can be found at eniacday.org. Organizers include the Penn engineering department and Unisys, the corporate descendant of the computer company that Mauchly and Eckert founded. Unlike in some past anniversary celebrations, this year organizers are recognizing not only the men who built the massive device, but also the pioneering women who programmed it.