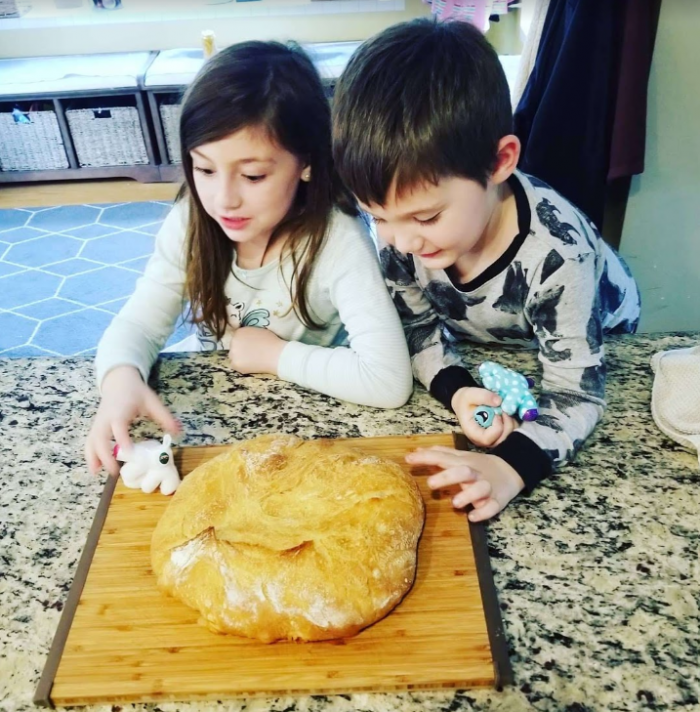 Learning to Bake Bread During COVID-19

Many Ursinus alumni have taken to the kitchen to keep busy during the pandemic, perfecting their bread baking skills along the way. Hear from one alumnus on his trying experience baking bread with his littlest future UC Bears as helpers.


As you can imagine, a COVID lockdown with a six- and four-year-old wasn’t exactly a walk in the park. Living in New England during the springtime also means the weather doesn’t always cooperate for playing outside: think rainy and cold most of the time. Thus, we had to find things to do inside. We put the kids to work spring cleaning every inch of our home, growing avocado trees from a seed in a cup of water, and running the gamut of easily completed science experiments. These occupied weeks of their time but we had hit a wall and needed more activities. To the annoyance of my wife, who cannot stand messes, my mind jumped to culinary arts. What was something that we all loved, was easy to make with your hands, and we could incorporate with our home cooked meals? The answer, of course, was Dutch oven homemade bread!

It seemed on the face of it a very easy and attainable goal for Sunday dinner: the kids were on board and we dove in headfirst. The recipe starts with four cups of all-purpose flour and 1.25 teaspoons of salt mixed into a bowl. This was a hit, with the kids spooning the flour into a measuring cup and then into the bowl. A huge mess ensued, to the chagrin of “Mommy Dearest,” with flour all over me and the floor. The next step was mixing two cups of lukewarm water (between 90 and 110 degrees) and one envelope of active dry yeast until the water and yeast look foamy. The kids noted it smelled “bad” but the foam was “cool.”

Next up, we had to pour the yeast/water mixture into a small hole at the center of the flour in the bowl and mix by hand (this part was completed mainly by me because it was “sticky”). As soon as the dough reached a drier consistency, the kids helped knead the dough. Little did I know that the fun of making homemade bread was over.

Now we had to wait for it to rise on three separate occasions. The first rise was two hours, at which point you simply scrape the risen bread from the sides of the bowl, spin the bowl 90 degrees, and then let rise again for another two hours. After the dough has doubled in size with the second rise (“proven” in “The Great British Baking Show” terminology), you begin the process of shaping the bread. The kids had lost interest after four hours of nothing, so this part was up to me.

The recipe called for kneading the dough then folding it under itself several times to form a ball at which point you pinch together the seams of the dough underneath. This was not as easy as it sounds, and I’m still not sure I did this perfectly. Another rise was called for, this time with the seam side down for one hour. While you waited for the dough to rise this last time, we had to place the Dutch oven inside the oven to heat up at 450 degrees.

At the end of this last hour of rising, we carefully removed the pot from the oven, lightly oiled the bottom, and placed the dough inside seam side down. The last step was to score the top and bake for 45 minutes, removing the lid for the last 15 minutes. When done baking, remove the bread from the pot, cover and let cool for 10 minutes before slicing.

All in all, the activity was a hit and we had a new skill to incorporate for any dinners we host. This recipe was easy to follow and came out great. Just don’t forget to prep beforehand or budget the day for the three separate rises. The kids enjoyed eating it the most (see picture and don’t mind the pajamas at 5 p.m.).

You can find the recipe at tasty.co/recipe/homemade-dutch-oven-bread