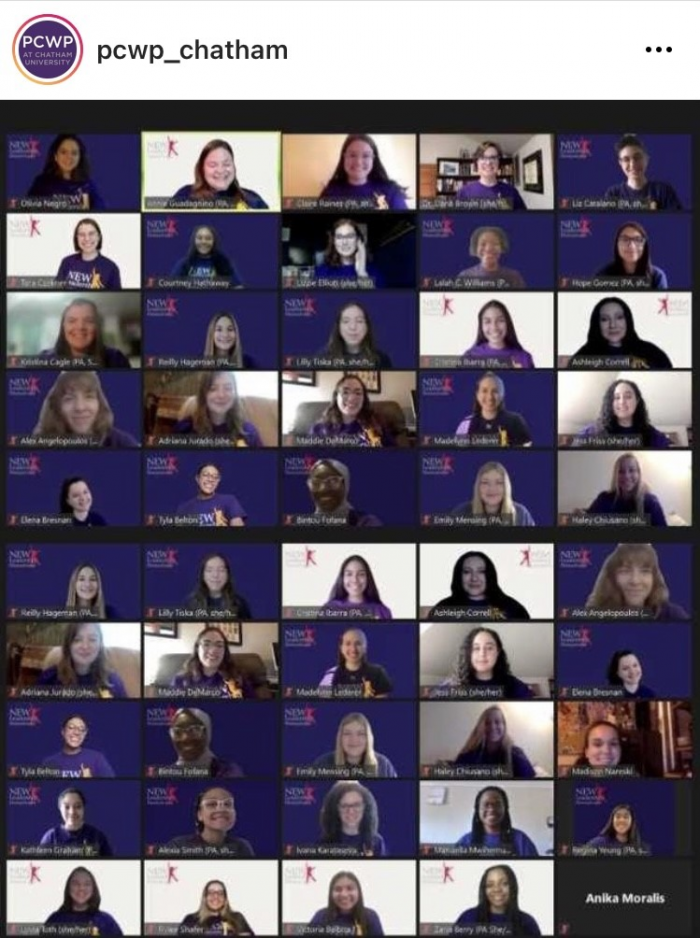 Two students selected for leadership program for Women in Politics

The goal of the nonpartisan NEW Leadership™ program is to educate and support women interested in politics and civic engagement. By providing attendees with resources, encouragement, and networking opportunities, NEW Leadership™ prepares women to enter politics and address the underrepresentation of women in American political environments.

The Center for American Women and Politics (CAWP) at Rutgers University oversees the NEW Leadership™ National Network which includes programs in 25 states. Olivia and Elizabeth participated in the Pennsylvania cohort which is organized by Chatham University’s Pennsylvania Center for Women and Politics (PCWP). Over the course of the five-day program, Olivia and Elizabeth attended panels with elected officials, legislators, lobbyists, staff members, and activists from across the nation.

While Olivia and Elizabeth both found all the speakers insightful and inspiring, they particularly enjoyed the student advocate panel that brought together a group of recent college graduates who made incredible impacts on their campus communities. This panel included Esder Chong, a graduate of Rutgers University who founded an organization to help advocate for immigrant students called RU Dreamers, Emily Turner, the founder of Starkville Pride, and many other inspiring and groundbreaking young activists. Elizabeth, who hails from Hopewell, New Jersey, enjoyed learning of Chong’s work and stated, “Having grown up in New Jersey, I had heard of many of the policies that she and her organization RU Dreamers had influence in creating, but never knew who she was. I was especially surprised and inspired by Chong when I heard her and RU Dreamers invited Governor Phil Murphy to sign into law that undocumented residents of New Jersey can receive a driver’s license.”

Olivia particularly enjoyed the day of the program that focused on Pennsylvania politics and government. She stated, “We heard from multiple state representatives and state senators from across the ideological spectrum and spoke with women who work ‘behind the scenes’ as members of legislators’ staffs and PA-specific lobbyists. They all imparted upon us a multitude of wisdom and advice that I am excited to use in my future as I study and engage more in PA politics.” Elizabeth took the opportunity of the state-focused day to compare and contrast PA and NJ state governments.

Elizabeth and Olivia both shared that they learned a lot about networking and how to best approach establishing good professional relationships in the context of politics. Elizabeth said, “I learned how important networking and making connections is. These connections, big and small, can often lead to an internship and jobs. Additionally, these connections can help pass legislation. I also learned about the power of persistence. Many of the speakers brought up persistence, in addition to networks, as an important aspect to their success.”

In addition to networking lessons, Olivia spoke of learning about the everyday affairs of the PA government, stating, “Representative Patty Kim mentioned that even though it appears politics is always contentious, 90% of legislation passed in the PA House and Senate passes with either unanimous or bipartisan support. She reminded us that the media influences how the public views politics, and stories about successful bipartisanship rarely make the news. All panelists expressed that being genuine and open-minded is the best way to approach politics; I appreciate that message because it aligns with my ideals and values, and it informed me that there might be a place for me in politics after all.”

While neither Elizabeth nor Olivia know just yet whether the program has dramatically changed their career trajectories or not, they both left NEW Leadership™ with a newfound sense of confidence and motivation to be more involved in politics and activism. Olivia mentioned that they were provided with packets that they can use to plan out their futures and reflect on their political goals. She shared that she will utilize the packet in her planning for the Ursinus Bonner Leaders program. Elizabeth mentioned that the conference has motivated her to further pursue her interest in campaigning and elections.

This year’s NEW Leadership™ program was unique because it took place virtually and connected all of the state cohorts. To allow for the attendees to communicate and bond, the organizers used the networking platform Slack to give everyone the opportunity to share with the entire national cohort. Olivia and Elizabeth interacted with students all the way from New York to Mississippi to Missouri.

Both Olivia and Elizabeth express their gratitude to the PCWP, Chatham University, and the CAWP for providing them with this opportunity to learn and grow as women in politics. They are happy to talk to anyone else at Ursinus interested in learning more about the program.