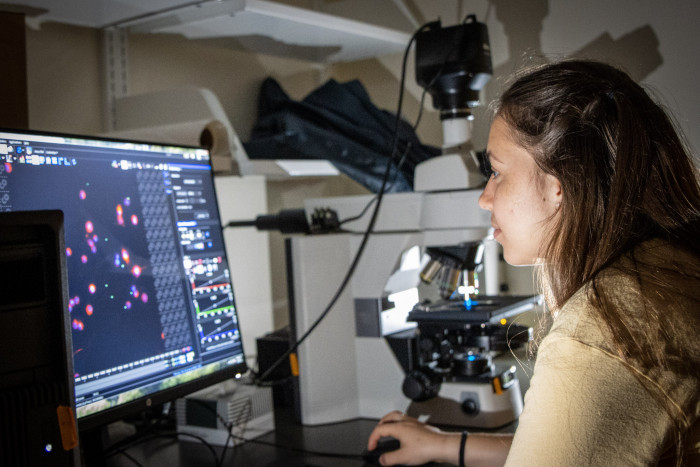 This summer I worked with my mentor, Dr. Jennifer King, to assess changes in the phagocytic activity of microglial cells after being exposed for varying time courses to HIV-Tat1—a protein produced by HIV infection and necessary for continued replication of HIV viral loads. Microglia are the macrophages of the central nervous system (CNS) and thus are activated in response to injury or infection in the brain. One characteristic of activated microglia is phagocytosis, in which they can engulf toxins and debris that are present in the extracellular environment. We were able to assess this ability by adding microscopic fluorescent beads to the cells’ media after co-incubation with Tat for a specified length of time. After an hour, the cytoskeleton and nuclei were stained and the cells were fixed to microscope slides. The slides were then imaged using a fluorescent microscope in which the phagocytic activity can be quantified by the amount of beads consumed by the number of cells. We compared the results of the Tat exposed cells to a control group with no protein exposure as well as cells co-incubated with lipopolysaccharide (LPS), a neurotoxin known to increase inflammation in the CNS.

The implication of our research connects to HIV-associated neurocognitive disorder (HAND), which is experienced by about 30-50% of those infected with HIV. HAND, like Alzheimer’s or Parkinson’s disease, is a form of neurodegenerative disorder characterized by the degradation of neural tissue in the central nervous system. Many of these disorders have been connected to prolonged neuroinflammation which can cause over-activated microglia to destroy healthy neural tissue through phagocytosis. By assessing changes in phagocytic activity of microglia in the presence of Tat, we are able to contribute to having a better understanding of HAND and possible future therapies.

This was a very valuable experience for me because I intend to pursue a career in biomedical research. I was able to learn and improve many useful laboratory techniques as well as develop the skills necessary for understanding relevant primary literature, analyzing my data, and presenting my work in a clear and professional manner.  The research was very much hands on and while I have done credited research for several semesters in the past, being able to dedicate several weeks solely to research meant that I was able to learn a lot and get integrated very quickly. It is really cool to look at all I was able to accomplish and know that I played an integral role in all of it.