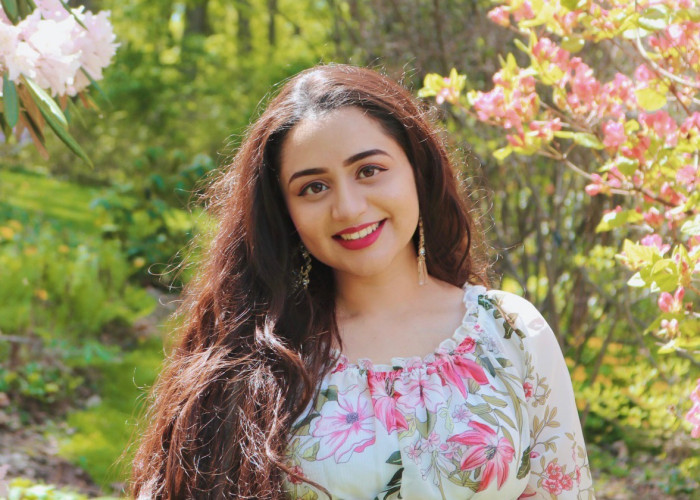 Simra Mariam ’21 has been a BIPOC feminist advocate and a professional journalist since she was a teenager. At Ursinus College, she opened the door to a new generation of marginalized writers and artists through an online publication that would become impactful and illustrious: Reclamation Magazine.
by Tommy Armstrong ’20 December 20, 2021

Mariam was just 17 when she wrote a Facebook post reacting to the media response of the 2016 election. As a Muslim-American, she said she “just felt completely isolated” and “reprimanded by the media.”

“My faith is just being trampled upon, and everyone’s consuming this content,” Mariam describes. Struggling to find representation in the media sphere, she felt that various channels seemed apathetic to the lived experience of Muslim-Americans. “And you’re just like, ‘Hey, if you maybe to talk to one of us, we could tell you!’”

It wasn’t long before Mariam’s post went viral, with thousands reacting by comment or email. Among them, an editor from the Huffington Post who reached out to Mariam, asking if she would write an article responding to the election of Donald Trump.

A former short story author and book review blogger, Mariam describes a pang of imposter syndrome. “I can write a response to it,” she recalls thinking, “but I don’t think it would qualify as like an article for something like the Huffington Post.”

Within a week, the first of 13 more articles that she wrote between March and November was published, all while completing her high school career and starting her undergraduate studies.

But at a larger institution, Mariam quickly decided that she craved a different kind of experience. She thought she might thrive in a liberal arts environment.

“Transitioning to Ursinus was probably the best decision that I ever made.” Mariam quickly built relationships with many friends, professors, collaborators, and mentors, and put her passions (which she had been writing about) into practice. She became president of the Ursinus College Muslim Students Association, the editor-in-chief of Ursinus’s student run newspaper The Grizzly, and an undergraduate research fellow for the Melrose Center of Global Civic Engagement. As a Melrose Fellow, she embarked on a life-changing journey to Puerto Rico, where other fellows rebuilt a hom e devastated by Hurricane Maria.

“Being in that kind of atmosphere with other women, and growing together and connecting with each other, and then also getting to immerse ourselves in a different culture and talk to people native to there … it was just a very humbling experience,” Mariam says.

“And only Ursinus can give you those kinds of experiences, honestly.”

At Ursinus, Mariam’s confidence in her own writing grew, and she wanted to extend a hand to the next wave of writers and artists.

“On the cusp of my 20th year, I kind of wanted to do something that was going to have an impact,” says Mariam. She knew she wanted to create meaningful change in the media industry.

She recognized a bias in the media industry where saw many editors only enlisted BIPOC writers to write about their oppression. Mariam saw the expanse of talent among her peers and other people of color, and wanted to give marginalized writers and artists a platform to showcase their gifts, abilities, and thoughts. She saw a publication as an awesome opportunity to broaden the scope of pieces that journals typically assigned to BIPOC writers.

Some mainstream news outlets forecast a future of futility, making substantial change to our political systems seem almost impossible. Then there are those who propagate fear of change, who place viewers on the defense against the coming onslaught of extreme liberalism, treating the process of transformation as troublesome. Mariam has a fresh optimistic take on tomorrow’s changemakers.

With the support of many friends, faculty, and staff at her back, Mariam launched Reclamation Magazine, a publication dedicated to providing a platform of marginalized writers to share their passions. She says, “I wanted to hit back a little bit and say, they can publish their art; they can publish stories that don’t have anything to do with the way they’re being oppressed in the world.”

“You can’t drown out these voices,” Mariam says, “and they will continue to get more powerful if you give them space to grow.”

Writers of any age can apply to Reclamation Magazine’s contributor program. “We are always willing to feature new creatives on our website,” says Mariam.

Mariam sees plenty to accomplish in the coming years. “We don’t have enough women of color in industries like ours…I want to be the person in the future that people can reach out to, especially girls like me that are starting college and have no idea how to navigate it.” Her message to them: please reach out.

“That that would make me the happiest in the world, whatever I’m doing professionally or personally, wherever I am in my life—I want to be the person who people can reach out to.” Mariam is not only a trailblazer, transformational writer, and strong leader. She is also a genuine listener, who lifts up stories from oft forgotten voices.

The activists and critical thinkers of tomorrow are approaching with what Mariam describes as an unprecedented grasp of political injustices, and she wants to help them find their footing.

“That’s my hope for the future.”

“Simple pleasures — the people and things I love most in the world. I’m happiest when I’m around those I can fully let my guard down with, or when I’m immersed in a creative task that isn’t tied to work and just serves as an outlet. The world can be brutal, but it’s essential that we find pockets of joy in the ordinary and mundane. It allows you to be deeply observant of your blessings and live in gratitude every day.”

“The personal growth I experienced as a result of my Ursinus journey. The one-on-one relationships with my professors and the intimate classroom conversations forced me out of my shell in the best way. My imposter syndrome quickly faded away and I felt, for the first time, like I was allowed to take up space in academia — like my voice belonged there, too. I’ve become a better speaker, writer, and person because of Ursinus, and I wouldn’t change my experience for the world.”

“To me, being a Bear for Life can be summed up in one word: compassion. For myself, for others, and for the world. As a creative, I’ve learned to give myself grace — to strive for authenticity over perfection. I’ve learned to practice empathy for a diverse range of experiences, to serve as a mentor for the next generation of young women, and I am trying every day to leave this world better than when I came into it. Thank you, Ursinus, for everything.”