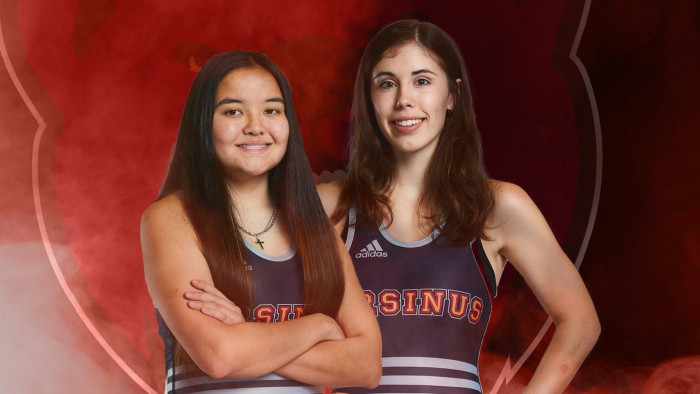 Ursinus will become the eighth college or university in the Commonwealth of Pennsylvania with an NCAA women’s wrestling program. Pictured: Laura Bradley ’25 (left) and Sydney Bowman ’22.
HomepageNewsUrsinus Adds Women’s Wrestling to Storied Legacy of DIII Athletics

It will become the eighth college or university in the Commonwealth of Pennsylvania with an NCAA women’s wrestling program.
by Matt Hagy April 04, 2022

Ursinus College, a trailblazer in women’s athletics for nearly a century, will add to its NCAA Division III legacy this fall when its new women’s wrestling program begins intercollegiate competition.

Ursinus will become the eighth college or university in the Commonwealth of Pennsylvania with an NCAA women’s wrestling program and the first Centennial Conference school to offer women’s wrestling as a varsity sport.

“The start of our women’s wrestling program at Ursinus is the next exciting chapter in our storied history and commitment to women’s athletics,” Ursinus Director of Athletics Erin Stroble ’02 said. “We proudly welcome our current and future women’s wrestling competitors in joining our long tradition of opportunity for female student-athletes.”

An extensive national search will begin immediately to fill the head coaching position.

Women’s wrestling will become the 26th varsity sport and the 14th women’s sport at Ursinus, which in 1981 was a founding member of the Centennial Conference, a competitive powerhouse that boasts a collection of schools thriving in both academics and athletics.

Ursinus already has a proud tradition in men’s wrestling, which debuted 1929-30. The Bears have produced 111 NCAA All-Americans and Scholar All-Americans, in addition to two CoSIDA Academic All-Americans. They won 11 Centennial Conference titles since 1994 and have produced 59 conference champions.

The Bears made history on the mat in December 2021 when Sydney Bowman ’22 became the first women’s wrestler to compete in and win a match for Ursinus in the Delaware Valley Aggie duals. Bowman went 3-0 in exhibition matches that day before going 2-1 in exhibition matches during a dual match with Delaware Valley University and Ferrum College in February 2022. Following in Bowman’s footsteps, Laura Bradley ’25 became the first official commit for the Ursinus wrestling program in March 2021 but did not compete this past year due to injury.

“This is an incredibly exciting time for Ursinus College, its athletic programs, and the wrestling team,” Ursinus Men’s Wrestling Head Coach Joe Jamison said. “The guys in the program have shown incredible support for Sydney and Laura this season, and the way they—along with our alumni and college community—have rallied around this effort has been remarkable. Ursinus’s tradition of supporting women’s athletics has made this possible, and I’m thrilled to be a part of this new era of Ursinus wrestling.”

Ursinus has garnered national acclaim for being at the forefront of women’s collegiate athletics. It is known for its longstanding success in field hockey under the leadership of the legendary coach Eleanor Frost Snell—who also guided the women’s basketball, softball, and women’s tennis programs—producing more field hockey All-Americans than any other college or university in the United States. Ursinus also sent numerous field hockey coaches and athletes to the Olympics; won several national championships in women’s lacrosse; and the women’s swimming team recently won six consecutive conference championships. Furthermore, Ursinus is a founding sponsor the annual Snell-Shillingford Symposium, which empowers women in the coaching profession and focuses on gender equality in sports.

Women’s wrestling has become one of the fastest growing sports in the United States from high school all the way up to the Olympic level. Since 1994, the number of women who wrestle in high school has grown from 804 to more than 28,000 (as of 2021). Thirty-two of 50 states sanction an official scholastic state championship, and there are 114 intercollegiate programs that currently sponsor women’s wrestling as a varsity sport with the list growing after recent announcements from Cedar Crest College and York College of Pennsylvania.