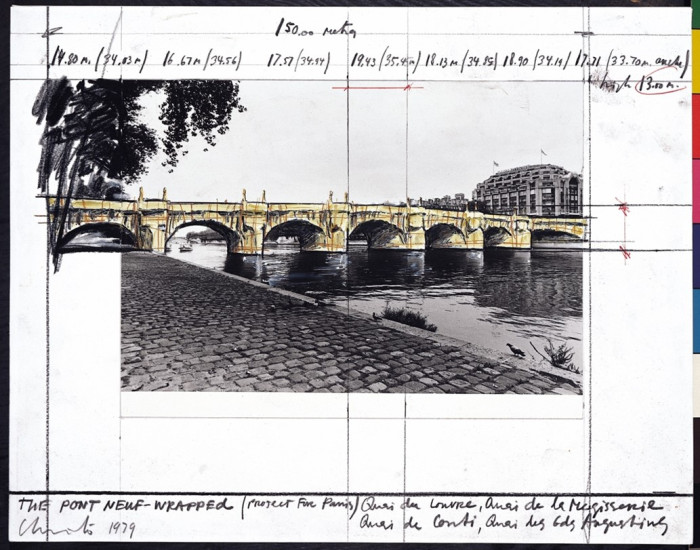 The Philip and Muriel Berman Museum of Art at Ursinus College will present Christo & Jeanne-Claude: The Tom Golden Collection, opening in June 2022.
by Lauren McCardel April 20, 2022

Christo & Jeanne-Claude: The Tom Golden Collection comprises over 125 original drawings, collages, prints, photographs and sculptures representing the impressive scope of the artists’ careers between 1961 and 2001.

As partners for more than 40 years, Christo and Jeanne-Claude created lasting environmental installation art throughout the world. Because their large-scale public projects were temporary, the preliminary designs included in the exhibition remain as important evidence of these installations. Capturing the transcendent nature of the artists’ practice, the collection illustrates the fearless yet playful nature through which Christo and Jeanne-Claude pushed the boundaries of traditional drawing, sculpture and architecture.

Drawings and collages of the large-scale public works, which served as preparatory models and later as documentation of the ephemeral work, include illustrations of Running Fence (California, 1972-76), Surrounded Islands (Miami, 1980-1983), The Pont Neuf Wrapped (Paris, 1975-1985) and Wrapped Reichstag (Berlin, 1972-1995). Many other realized and unrealized projects, such as Wrapped Woman (1968) and Package on Radio Flyer (1993), are also represented in original drawings. These materials, valuable for their aesthetic and technical profundity, offer a glimpse into the conceptual and problem-solving phases of Christo and Jeanne-Claude’s design process. The sale of such experimental documentation helped finance the artists’ open-air artwork, often quite expensive and challenging to produce.

The collection reflects the long personal and professional relationship Golden had with Christo and Jeanne-Claude, beginning in 1974 when they met during the public hearings for Running Fence. Golden managed or assisted the artists on several projects throughout the late 20th century, building an expansive personal collection of their work along the way, now one of the largest in the United States. The collection represents not only the special relationship between artists and a collector, but also the collaborative effort between the artists and the many people involved in producing their often-monumental works.

The circulating exhibition is organized by the Sonoma County Museum, Santa Rosa, Calif., which received the collection in 2001 as a donation by Tom Golden.