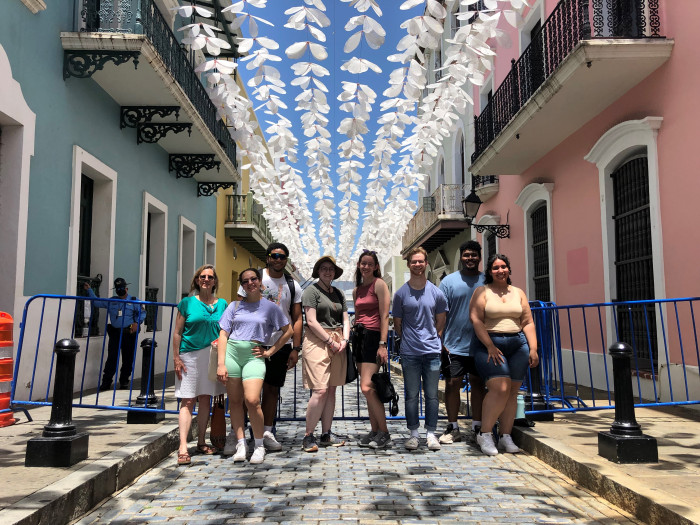 Associate Professor of Politics Rebecca Evans and the 2022 cohort of Melrose Fellows pose in Puerto Rico. 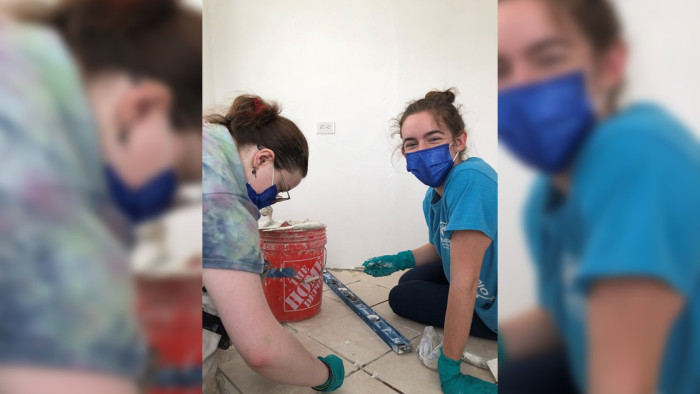 Abby Peabody ’22 and Kevyn Dewees install a floor in a house in Puerto Rico. 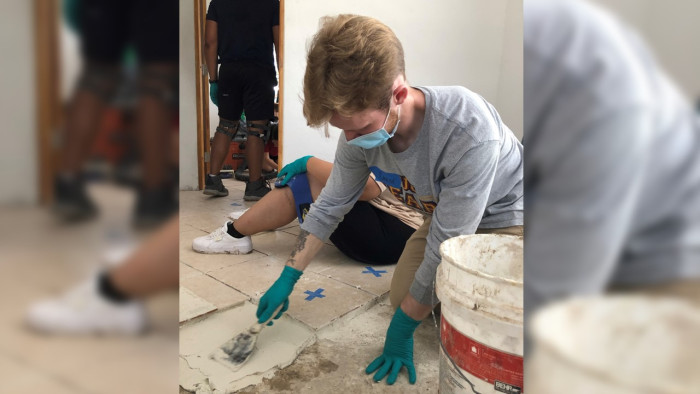 Connor Donovan ’22 applies grout to a floor in a home in Puerto Rico. 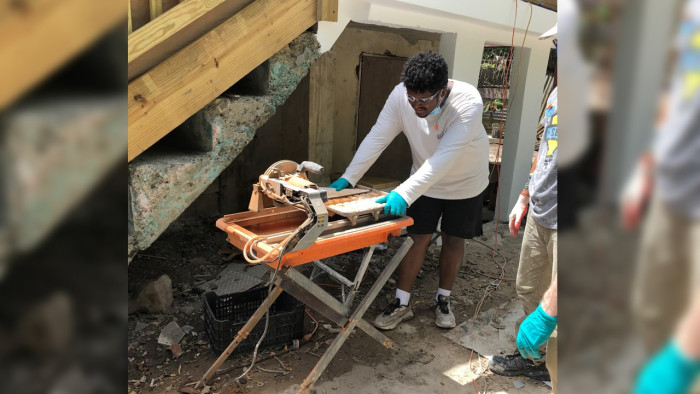 A group of seven recently graduated fellows for the Melrose Center for Global Civic Engagement traveled to Puerto Rico to repair a family home damaged by Hurricane Maria in 2017.

As sophomores, Melrose Fellows typically study a social and global issue and then travel as a group to engage in community research on that issue in locations all over the world. Enrolled in “Cross-Cultural Explorations – Global Service and Leadership” at the start of their spring semester in 2020, the class of 2022 cohort initially focused on the problems of—and potential solutions for—hunger and food insecurity, which led to a more focused study of Puerto Rico in anticipation of their service-learning trip. Due to COVID-19 restrictions, the trip was postponed twice.

This past semester, in a core capstone course with Associate Professor of Politics Rebecca Evans, the group discussed We Fed an Island: The True Story of Rebuilding Puerto Rico, One Meal at a Time, a memoir by chef José Andrés that describes how a group of chefs fed hundreds of thousands of people after Hurricane Maria ripped through the island. The class also learned about World Central Kitchen, a nonprofit organization established by Andrés to provide food aid to communities facing unusual hardships, both in the United States and around the world.

At the conclusion of the semester, the group was finally able to travel to Puerto Rico, where they volunteered with SBP, a nonprofit that was originally founded in 2006 as St. Bernard Project to help Louisiana’s St. Bernard Parish following Hurricane Katrina; they now respond to natural disasters nationwide and beyond. The last group of fellows who were able to travel also assisted with rebuilding efforts in Puerto Rico in 2019.

Working alongside local community members and Americorps volunteers, the Melrose Fellows helped with taking up damaged flooring, laying tiles, and renovating a bathroom.

“We were there from 8 a.m. to 4 p.m. helping wherever they needed assistance,” said Abby Peabody ’22, who graduated with a degree in international relations. “I learned how to tile and apply grout, and some of us spent time cutting tile or doing demolition in the bathroom so that the plumbing fixtures could be installed.”

In thinking about Andrés’ book, Peabody said that one influential aspect was the connection of food and culture. “What was meaningful was the emphasis on patience and having an open mind. As someone who plans everything and schedules things to the last minute, this trip forced me to get out of that mindset and to observe more and to breathe,” they said.

“When I go out to eat at home, there is an emphasis on getting the customer in and out as quickly as they can. In Puerto Rico, we had to plan for a three-hour buffer between things if we wanted to go out. The longer duration at a restaurant meant a longer time together, where after each meal it felt like we were phasing out of the simple pleasantries of talking about the weather and our recent graduation and transitioning to deeper discussions like telling stories and jokes.”

It presented an opportunity for the group to get a better understanding of the work of the late Ambassador Joseph Melrose ’66, for whom the center is named. “I had already understood who he was and what he did, but being able to hear stories about him made me realize just how much the Melrose Center emulates him,” said Peabody.

“Ambassador Melrose was a passionate advocate for study abroad and experiential learning,” said Evans. “He recognized the vital importance of international understanding and intercultural learning and insisted that these are best learned through first-hand experience and interaction with people from other countries and cultures.

“This trip provided an opportunity for the Melrose Fellows to work together as a group and to gain real-life insights into the importance of global citizenship – just the kind of immersive experience that Ambassador Melrose encouraged. Following the lead of chef José Andrés, they saw that we can achieve great things by working together.”