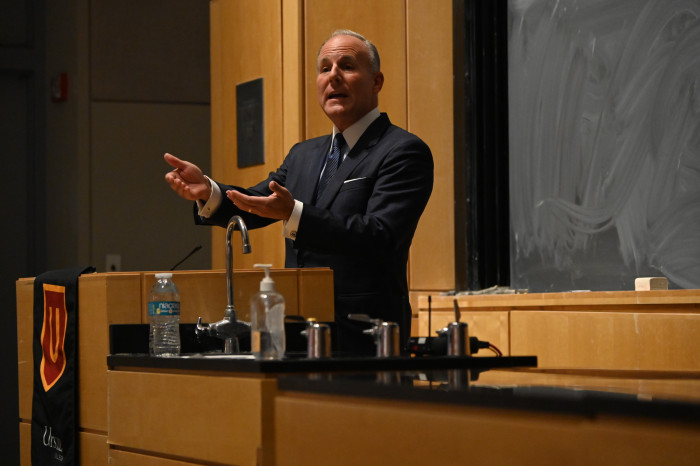 His far-reaching talk explored the prevention of public shootings, the political landscape around Zionism, and ways in which Jewish heritage is an oft overlooked foundation of American society.
September 22, 2022

Elan Carr, a former State Department Special Envoy to Monitor and Combat Anti-Semitism, gave a lecture about the historical and present contexts of anti-Semitism around the globe. The event was part of the Jewish Life Lecture Series, which has been made possible at Ursinus through the generosity of donors from Scholars for Peace in the Middle East.

His solution for the plague of prejudice is insightful, but unexpected.

“You can’t fight anti-Semitism with tolerance,” he said. “We need to practice philo-Semitism.” This means acknowledging and celebrating Jewish contributions to the world as we know it.

It is a little-known fact, Carr said, that Hebrew was a serious candidate for the official language of the United States at the time of writing the Constitution. That’s how deep our country’s historical relationship with Judaism goes.

“How many of you knew that May is Jewish American Heritage Month?” Carr asked. Few hands were raised. In April of 2006, George W. Bush proclaimed that May would be an official month for celebrating Jewish American history, and every year since, each active president has signed the monthlong celebration into reality. Carr wants this to be on people’s minds every spring.

How do you do that? It is Carr’s belief that people need to compose Jewish-centered curricula for the month of May and present them to school boards who can vote the lessons into reality.

Carr’s lecture was one of a series of presentations on Jewish social and political matters that have been taking place at Ursinus since 2015. Previous speakers in the series have included historian Jonathan Sarna, who spoke on American Judaism, and journalist David Makovsky, who spoke about the Israeli-Palestinian conflict.

“After the lecture, what I heard most often from our students is that they had simply been unaware of much of what Carr had to say about the past and present of anti-Semitism,” said Professor Jonathan Marks, professor of politics and chair. “For them, Carr’s talk was an eye-opener.”

For the general population looking to exercise philo-Semitism, Carr invites everyone to call out anti-Semitism where they see it and celebrate Jewish accomplishments as you witness them.