Create and Perform with Us. 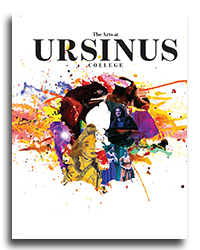 There are so many ways for students to truly live the arts on campus, such as performing in dance or music concerts, participating—either on stage or behind the scenes—in theatrical productions, showcasing their writing in our literary magazine, or displaying their art in the Annual Student Exhibition. Adding to the vibrancy of campus are a variety of student-run organizations, including a cappella groups, dance and theater troupes, a gospel choir, a literary society, and a step team. Each year, Ursinus bolsters its commitment to the arts by awarding scholarships to standout applicants who excel in the areas of creative writing, dance, music, and theater.

Create and perform with us.

The Arts After Ursinus

A Campus Alive with the Arts
A Letter to the readers by Jon Volkmer
Professor of English, Director of Creative Writing

Just after the start of each new year, outside of my third floor window in Olin Hall, the starlings captivate me. In the hour before sunset, I watch the flock alight on the Japanese pagoda trees between Wismer and BPS. The early ones, on the topmost branches, trickle downward as if on tiny escalators, making room for new arrivals, until every twig is twittering with glossy black shapes, furiously feasting on the pale green fruit of winter. Defectors swoop away, followed by more, until the entire assembly launches and banks rightward in perfect synchrony toward the Philip and Muriel Berman Museum of Art.   Read Full