On View: Authenticity and Ethics in Exhibitions 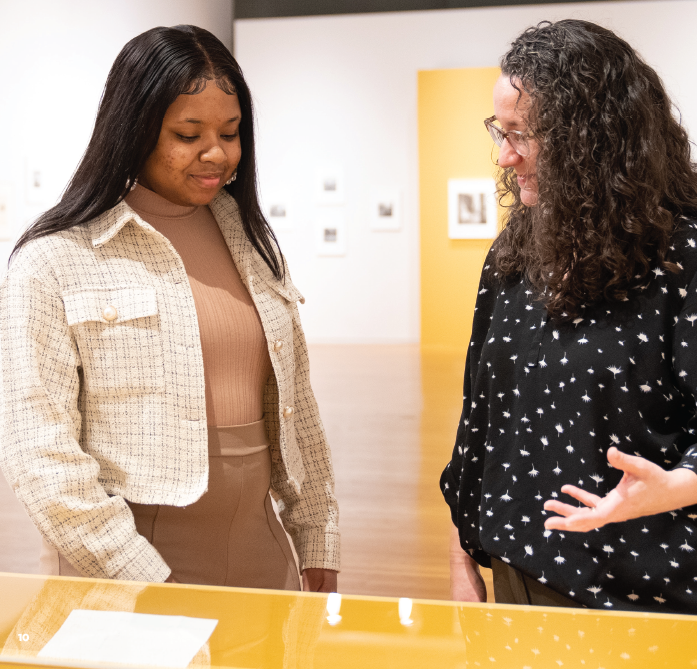 As a Bonner Leader, Maia Peele ’23 is accustomed to reflecting on how her service can help not only the campus community, but also the greater good.

It’s an outlook the anthropology and sociology major brings to her academic pursuits too. What she likes most about her area of study is learning about different cultures, particularly underrepresented ones, and working to shine light on and preserve their authenticity.

It was an internship with Adebunmi Gbadebo, an artist who uses dirt from a South Carolina plantation to create clay vessels honoring her ancestors, that helped set in motion Peele’s independent research project that focuses on the role that museums play in our society.

Peele argues that when museums put human remains on display as art and artifacts, they diminish the human aspect of the remains. As such, Peele questions whether they are sites of educational institutions or sites of racialization by examining three case studies: Sarah Baartman, a South African woman with steatopygia who was put on display in the early 1800s and whose remains were displayed in a Paris museum until 1974; Ota Benga, a Congolese pygmy who was displayed with apes at the Bronx Zoo in the early 1900s and whose remains were held postmortem; and members of the Africa family who were killed in the 1985 MOVE bombing in Philadelphia and whose remains were held for decades by the University of Pennsylvania and Princeton University.

One of her takeaways from Meghan Tierney’s “Museum Studies” course was that it’s important to make sure that museum displays are authentic and ethical. In this regard, museum curators and anthropologists need to work hand in hand. “I want to shed light on the mistreatment of black bodies in our society and bring the human aspect back into the body, especially in museums,” says Peele. “It’s important to me to do the research justice and inform as many people as I can. I’m driven by my own ancestors. I feel that spiritually.”