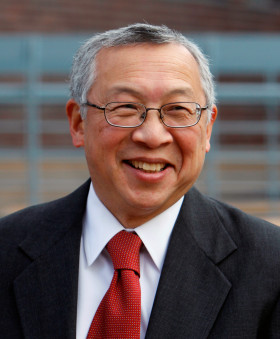 Bobby Fong became the 15th President of Ursinus College on July 1, 2011, starting the academic year with the Class of 2015. During the time he was President of Ursinus, he reinvigorated the College’s commitment to the liberal arts and emphasized a personalized education that leads to lifelong success.

His academic career began teaching at Berea College in Kentucky. He then served as Dean of Arts and Humanities at Hope College in Holland, Michigan, and Dean of the Faculty at Hamilton College in Clinton, N.Y. From 2001 to 2011 he served as President of Butler University in Indianapolis, a decade marked by highly successful financial management, strategic planning and emphasis on academics.

At Ursinus, he led the campus in creating a seven-year strategic plan, and the establishment of two interdisciplinary centers: the Center for Science and the Common Good and the U-Imagine! Center for Integrative and Entrepreneurial Studies. He believed in giving students the skills to not only make a living, but to make a life of purpose. His vision for the transformative power of an Ursinus education included preparing students for the world through experiential education.

Passionate about the liberal arts, Dr. Fong was past Chair of the Board of the Association of American Colleges and Universities, and served on the Presidents’ Council of the Association of Governing Boards. He also served on the boards of the National Association of Independent Colleges and Universities, the Council for Higher Education Accreditation, the Council for Independent Colleges/Network for Vocation in Undergraduate Education, the Lingnan University Foundation, Project Pericles, the Annapolis Group, and the Greater Philadelphia Chamber of Commerce