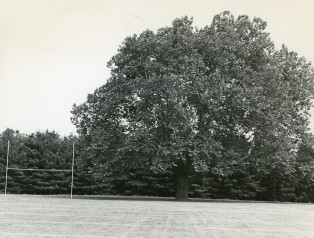 Did you know that Ursinus had a large sycamore tree in the end zone of our football field? What became of it? Learn more about this odd claim to fame! 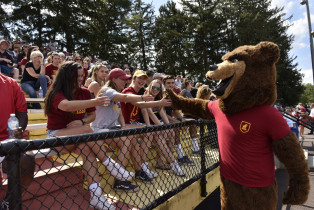 Ever wondered how Ursinus adopted the bear mascot? Find out everything you need to know about our furry friend. 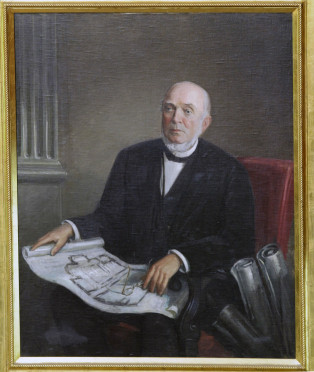 The College’s first benefactor was Robert Patterson of Philadelphia. Before his death in 1893, he gave more than $50,000 for the building of Bomberger Hall.

This portrait, which hangs in Bomberger Auditorium, shows Patterson with plans for Bomberger. At his death a bequest of $50,000 established an endowed fund that ensured the survival of the College through its early years. 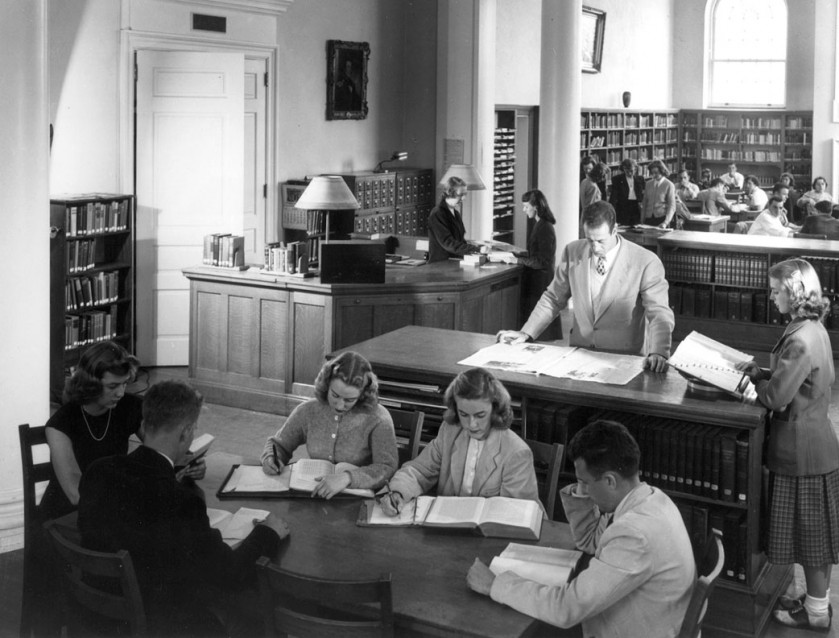 The history of Ursinus is one that stays true to the founding spirit of egalitarianism. The College has evolved into a robust campus with many measures of diversity, social growth and academic success. 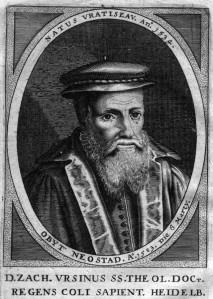 The “high church” faction established Franklin & Marshall College in Lancaster, Pa. The low church group, led by Bomberger, a German Reformed pastor from Philadelphia, established a school in the village of Freeland.

The new college moved onto a site that had been Todd’s School, a one-room schoolhouse, and then had been Freeland Seminary, a Mennonite preparatory school for boys that closed because of the Civil War. The Commonwealth of Pennsylvania granted the college its charter on Feb. 5, 1869.

The new institution was named for Zacharias Ursinus, a 16th Century academic and theologian from Heidelberg, Germany, whose Heidelberg Catechism defined for Bomberger and his friends a spirit that  was egalitarian, unpretentious, humble and frugal — a spirit that survives to this day on the Ursinus campus. 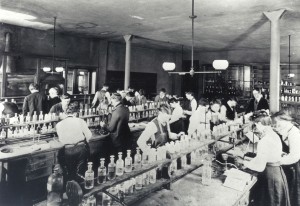 Students work in a chemistry lab in the 1890s.

The school was for men only and included an academy, or high school, as well as a college.  The curriculum was heavily religious, aimed at preparing students to become members of the clergy. The Class of 1873, the college’s first graduating class, had only five members. Today, the student body stands at about 1650.

The Pennsylvania Female College was located down the street from Ursinus. When it  closed in 1880, Ursinus admitted Minerva Weinberger, the daughter of Prof. J. Shelly Weinberger.  Minerva performed so well as Ursinus’s first female student that the college officially opened its doors to women the next year. Minerva Weinberger graduated valedictorian of her class in 1884.

In the 19th Century, the Zwingli and Schaff literary societies were popular activities on campus, joined by the literary women’s Olevian Society, after the college admitted women. Students played  baseball, but most recreation consisted of walking to Trappe, the Perkiomen Creek or Valley Forge; boating or ice skating on the creek. 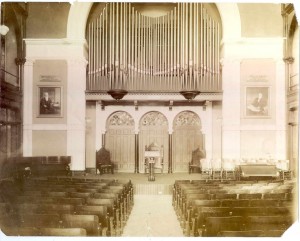 The interior of Bomberger Hall.In 1891, the College’s signature building, constructed of Pennsylvania blue marble in Romanesque style, was dedicated and named for John H. A. Bomberger, who had died only the previous year. Bomberger Hall stands today as the oldest academic building on campus. In the 19th Century it housed classes of all departments, including a chemistry laboratory in the basement.

In 1896, the town of Freeland officially incorporated as the Borough of Collegeville, the name the Pennsylvania Railroad had bestowed in 1869—because of the Pennsylvania Female College. In the years since, the “college” in Collegeville has come to mean Ursinus. In 1910, with 135 students in the college and 96 in the academy, the trustees voted to close the academy to make room for the anticipated growth of the college.

A Haven for Women’s Athletics 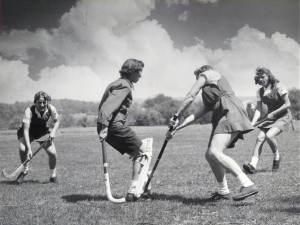 As early as the 1930s, Ursinus became known for its prowess in women’s athletics. The legendary Eleanor Frost Snell, a multi-sport coach known best for her work in field hockey, never had a losing season in the sport in 38 years at Ursinus (her lifetime  record is 191-60-29). Two of her students went on to coach  the U.S. Women’s Field Hockey Team. One of these, Vonnie Gros, 1957, coached the other, Beth Anders, 1972, on the 1984 team that won an Olympic bronze medal in Los Angeles.

Hundreds of Snell’s students and their students have gone on to coach in top programs nationwide.  Laura Moliken, the college’s first female Director of Athletics, who was coached by Anders at Old Dominion, coached the Lady Bears to NCAA Division III national champions in 2006.

The decades of the 20th century were impacted by two world wars and a widespread economic depression. Through it all, Ursinus persevered and grew, surviving lean times through timely gifts of several donors. The curriculum evolved with a growing emphasis in the sciences and premedical studies, as well as in history and languages. The egalitarian spirit persisted as women were given equal opportunity in every academic department, and Ursinus graduated its share of future female physicians and lawyers from the 1920s onward. 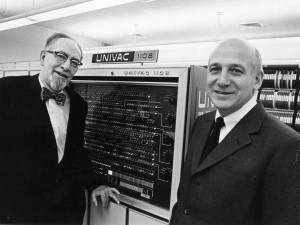 In the 1930s and early ’40s, Dr. John Mauchly, an eccentric, brilliant professor of Physics, held sway in Ursinus’ Pfahler Hall of Science. He was an inventor and innovator whose work at Ursinus led to his later accomplishment as co-inventor at the University of Pennsylvania of ENIAC, considered the first all-electronic, digital computer.

In 1938, Jerome D. Salinger, described as gallant and charming, came from New York City and lived in Ursinus’s Curtis Hall.

He wrote a column in the student newspaper called “The Skipped Diploma,” but did not return for spring semester. The author of The Catcher in the Rye and other works later spoke fondly of Ursinus.

With the advent of World War II, Ursinus saw the numbers of its male students dwindle, losing half of them in 1942. While the student body dropped from 535 to about 350 through the course of the war, Ursinus acquired a Naval V-12 unit, which brought in military students from all over the country, and gave the campus national diversity for the first time.

After the war ended, the largely regional student body of pre-World War II became more diversified as returning servicemen used veteran’s benefits to fund their college educations. In this era, academics continued to flourish, and the science program produced a Nobel Laureate, Dr. Gerald Edelman1950, who won Nobel Prize for Medicine or Physiology in 1972. 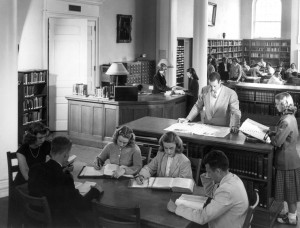 The old library is now the home to the Berman Museum of Art.

During the societal changes in the 1960s and 1970s, compulsory chapel became history, and rules governing women’s hours and dress were abolished. A first-year make-or-break course that integrated chemistry, mathematics and physics was discontinued; and comprehensive exams were instituted in some humanities courses.

Students were encouraged to do independent study as College Scholars, open to all but first-semester freshmen, or as seniors, with a goal of departmental honors at Commencement. New, interdepartmental majors of also were approved. A National Endowment for the Humanities (NEH) grant funded an interdivisional studies program on the community and civility.  An American Studies Program for students from Japan’s Tohoku Gakuin University has brought Japanese students to campus since 1973 and continues today, with a companion program in which Ursinus students spend four weeks in a Japanese Studies program at TGU. 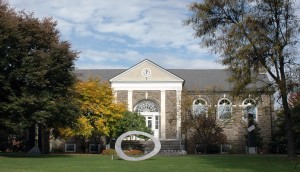 The Berman Museum as it appeared in the 1990s.The late 1980s and early 1990s set the college on its current trajectory as a preeminent, nationally recognized liberal arts college. In 1989, the opening of The Philip and Muriel Berman Museum of Art on the campus marked the college’s emergence as significant force in the cultural life of the region.

In 1990, Phi Beta Kappa invited Ursinus into its elite ranks. Ursinus is one of 8 percent of all U.S. schools to host a chapter of this national honor society. Also in 1990, the F.W. Olin Foundation awarded a $5.6 million grant to Ursinus to construct a humanities building.

The creation in 1993 of the Centennial Conference put Ursinus in the ranks of its neighboring elite colleges, competing on field and court against Swarthmore, Bryn Mawr. Haverford, Dickinson, Gettysburg, Johns Hopkins and others, and also in stressing the importance of the scholar/athlete.

The mid 1990s was marked by the renovation and expansion of Pfahler Hall of Science, barely touched since its construction 65 years earlier. Looking ahead, the college had a fiber optic computer network installed throughout the campus. Just as the investment in Pfahler Hall cemented the college’s reputation as a great college for science, the new Floy Lewis Bakes field house reinforced Ursinus’ great tradition in athletics, notably women’s athletics. 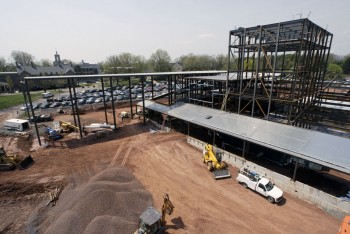 As the college saw growth in applications and students, programs in theater, dance, the environment, biochemistry, neuroscience, art history, music and East Asian Studies were added to the curriculum. The newest academic building, The Kaleidoscope performing arts center, has attracted students interested in the performing arts.

Under the late President Bobby Fong, the college became known for its “liberal arts plus” philosophy, which prepares students not just to make a living, but to make a life of purpose. The academic rigor provides the foundation for an education that teaches students to think critically, communicate effectively and act ethically. An Independent Learning Experience requires students to graduate with the experience of a completed internship, a study abroad program, independent research, or student teaching. Students often major in more than one discipline.

Today Ursinus College is independent and non-sectarian, but has never strayed from the egalitarian vision of J.H.A. Bomberger as a place where individual flourishing is intertwined with the welfare of others.