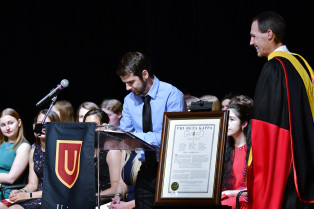 The Tau of Pennsylvania Chapter at Ursinus College was installed as a Chapter of the Society on March 29, 1992.

An outdoor, physically-distanced induction ceremony for initiates was held on Friday, May 14, at 3 p.m. on Ursinus College’s campus. A recording of the ceremony is available below for inductees’ families to view.

Phi Beta Kappa is the oldest and most respected academic honor society in the United States, having been established at the College of William and Mary in 1776. Membership in Phi Beta Kappa signifies excellence in one’s entire academic experience as an undergraduate. Furthermore, only a small fraction of all colleges and universities in the US possess a chapter of Phi Beta Kappa. Election of members is also limited to no more than fifteen percent of any senior class, with no more than twenty percent of these students having been elected during the junior year.
Junior students with a Grade Point Average at or above 3.75 and senior students with GPA at or above 3.50 are eligible for nomination and thus consideration for Phi Beta Kappa. Students must also have completed a full year of intermediate level language in college.
Each year the Tau Chapter solicits nominations from faculty and staff. A committee of Chapter members then reviews student records and makes recommendations to the entire Tau Chapter as to which students it recommends for membership. The Tau Chapter considers these recommendations and additional students brought forth independently by Chapter members. This meeting results in the list of students who are offered membership in the Society by the Tau of Pennsylvania at Ursinus College.
Along with election and initiation of new members each year, the Tau Chapter supports the John Moore Wickersham Sophomore Book Award. This award, in the form of a book and certificate, is presented at the initiation each spring to the sophomore(s) with the highest GPA after 3 semesters at Ursinus College. Occasionally, the Chapter invites Phi Beta Kappa scholars to speak at events open to the entire campus.