Daryl Kwasi Burgee’s professional career spans more than forty years. As a native of Philadelphia, his unique ability covers a wide variety of drum styles and techniques from various parts of the world. Burgee has been playing drum sets from the age of six. 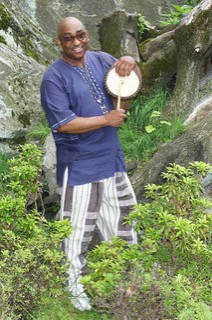 Daryl Kwasi BurgeeHis early development started in soul, R&B, and funk music. He quickly became passionate about Jazz and traditional West African music. Daryl spent many years studying the styles and techniques of West African drumming and music; now he is considered to be one of the leading educators in traditional arts and culture in the city of Philadelphia.

In 1998 Burgee was asked to perform with The Philadelphia Orchestra in the production African Portraits. Directed by Andre Raphael Smith and composed by Hannibal Lokumbe. For seven years he was the chief coordinator of traditional music for the Africa Americas Festival and Parade. He also has many collaborative projects with jazz greats like Jamaaldeen Tacuma, David Murray, Doudou Ndiaye Rose and Zakir Hussain. Burgee background includes years of research in West African music as well as Cuban folklore and Caribbean music. Due to his experience in African drumming he is the founder and artistic director of Spoken Hand a percussion orchestra and Jaasu Ballet African Dance.

He has been a teaching artist for over 40 years. He works with Dunya Performing Arts Company and World Connections and has taught in schools throughout the Delaware Valley, as well as nationally and internationally. Burgee was invited to Kingston and Montego Bay Jamaica and the University of Virgin Islands in St. Thomas to lecture on African and Caribbean music and also to give a series of workshops. With all his accomplishments throughout the years Burgee is continuing to bring new ideas to the field of music.