2021 Alumni Award for Service to Humanity 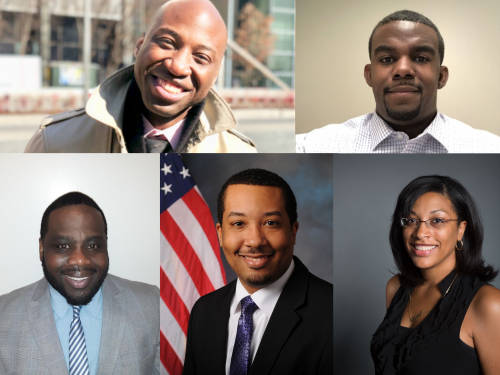 “Start small and start simple” is the advice that Just 4 People, Inc. co-founders and Ursinus College alumni Byron Coleman ’03, Harry Michel ’03, David Morris ’03, Tonya L. (Towles) Wilson ’05, and Michael Wilson ’03 would share to anyone asking how they can address needs in their communities. That advice worked for them when they were able to pursue an idea they had as undergraduates to help youth, the homeless, single moms, and other community members in need in the Philadelphia and Southern New Jersey areas. Starting small in 2014 by providing Christmas gifts to a single mother earning her GED and her two children, the group became a non-profit charitable organization a year later and has kept going, growing, and attracting private donations and corporate sponsors including Bombas, Good 360, and Walmart.

Having a mindset of someday giving back to the neighborhoods that supported them has always been in their hearts but meeting at Ursinus was the catalyst that started their connection and deeper understanding of service. Coleman, Michel, Morris, and Michael Wilson met and became fast friends during Ursinus’s summer Bridge program (now the Crigler Program) that helped them acclimate to college life before their first semester. Tonya (Towles) Wilson began at Ursinus two years later and quickly became part of the caring group that wanted to help break down barriers for people within underserved communities. Looking back on their college experiences, they credit several Ursinus programs that greatly contributed to their resolve to give back including a community service day and the two-semester Common Intellectual Experience, which examines reflective questions surrounding leading a responsible life.

After graduating and establishing professional careers, the five began to connect their networks, often leaning on their family, friends, and colleagues to support the efforts. As they continued faithfully, the outreach grew, and more outside interest and donations came in. Forever grateful for every dollar contributed, they continue to provide for several recurring causes that are true to their mission.

Just 4 People has distributed regular donations of food, toiletries, baby supplies, household staples and cleaners, blankets, winter coats, hats, gloves, and clothing essentials to homeless shelters and food pantries including Cradle of Hope, People’s Emergency Center, Stenton Family Manor, and the Neighborhood Center. Philanthropy has also permitted the organization to continue making Christmas memorable for single moms and their children, to allow youth to participate and be mentored in organized sports, and to provide furniture for single moms and their children to move into their first homes. The non-profit group received a corporate gift of 4,000 pair of socks from Bombas and distributed them to shelters and also personally handed out 200 pairs to homeless men and women on the Philadelphia streets and in the subway system.

“The families in our communities have been blessed by Just 4 People. They have provided donations of food, clothing, and paper goods that have immediately helped the children in our programs and the underserved and homeless in our local area,” said Tess Holley, director of the Child Care Learning Center and supervisor of the Community Kitchen at The Neighborhood Center in Camden, N.J.

“Just 4 People is the only organization that I feel comfortable with just calling and asking if they can help provide the things that we need,” said Rachel Mullelly, executive director of Cradle of Hope, an organization that provides transitional housing and support services for single mothers and their children. “Two new moms recently graduated from our program and needed to take our beds and cribs with them. I called Just 4 People and asked if they would please let me know if they knew of anybody who could donate a bed or a crib. That day they purchased two brand new beds and cribs with mattresses and had them delivered straight to us. It is just incredible that they do this as volunteers. They all have full-time jobs!”

About the award recipients: 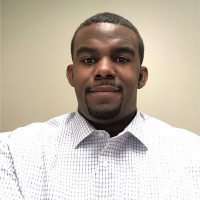 Byron Coleman ’03 earned a bachelor of arts degree in sociology at Ursinus College and is a client associate with Merrill Lynch. 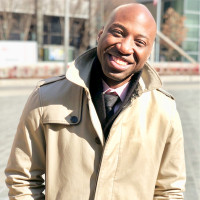 Harry Michel ’03 earned a bachelor of arts degree in English and communications at Ursinus College and is co-founder of Locus Mobility, an app based mobile car care service company. 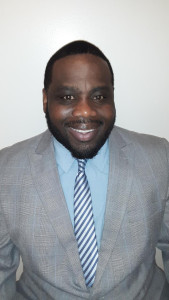 David Morris ’03 earned a bachelor of arts degree in sociology at Ursinus College and is a quality assurance specialist with New Jersey’s Department of Human Services. 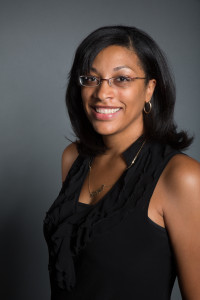 Tonya L. (Towles) Wilson ’05 earned a bachelor of arts degree in English literature and Spanish studies at Ursinus College and a master of arts degree in marketing communications and advertising from Emerson College. She is senior manager of field operations for American Bible Society. 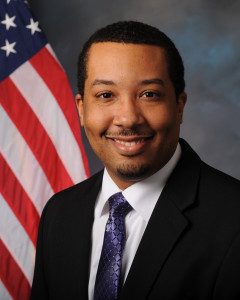 Michael Wilson ’03 earned a bachelor of arts degree in political science at Ursinus College and a juris doctorate from the University Massachusetts School of Law. He is the chief counsel for Defense Logistics Agency Troop Support.

How is winning an Ursinus Alumni Award significant for your group?

Ursinus is where the seeds for Just 4 People were planted. It started at the summer “Bridge” program (now the Crigler Institute). There were the many Wismer roundtable debates. There were the group trips to Zacks or Wawa. Coming together for late night Pfahler study groups, it all had an impact on our relationship. We launched our individual careers, but realized how Ursinus shaped us. We wanted to take those experiences and use it to impact others in the same way. In 2014 we launched as Just 4 People. This recognition by Ursinus feels as though we’ve come full circle. It’s empowering and encouraging. To share our story with the Ursinus community is an amazing accomplishment. We hope this serves as an invitation for other alumni to join us in impacting the communities around us.

How did Ursinus College instill a desire to serve your communities?

Community Service Day was a part of Freshman Orientation, a practice we hope still exists. We were bussed out to Cobb’s Creek Park in Philadelphia for our service project, which was just around the corner from home for some of us. Yet, for some of our peers, the location and activity forced them to confront their myths of the city and danger. It truly highlighted how some areas and people are perceived as “other,” despite being part of the same fabric of community. The experience was special to our group. It served as an example for us to mold our college experience, not based on our “other-ness,” but by our efforts. This is central to how we serve the community as Just 4 People. Can we create collaborative experiences for the donors in our network? How does that impact the communities and individuals we serve? The feeling of “other-ness” comes from labels like homelessness, addiction, low-income. These labels are barriers that separate us, and are amplified by myths. Just 4 People creates a bridge for those in our networks to push past those myths. Our outreaches connect our networks and communities through a shared experience and effort.

Why has giving back to Ursinus been important to you?

For most, college is four short years. But Ursinus never ended for us. We carry it forward each day through our friendship and service, it’s who we are. Supporting the college, the students and our communities is a part of that. The Ursinus education and legacy is now part of our intellectual and moral DNA. We continue to answer the questions of the Common Intellectual Experience. What should matter to me, how should we live together, how can we understand the world? In the end it all comes back to the unifying question… What Will I Do?

What were your proudest UC moments?

Byron Coleman ’03 - My proudest moment at UC was not just one moment but building the strong bond with Dave, Harry, Mike and Tonya. We all leaned on each other throughout time and all of us graduating together and maintaining this bond would probably be my proudest moment from UC

Dave Morris ’03 - One of the scariest times at UC also ended up being one of my proudest moments. When the attacks happened on September 11, 2001, we all, as students, felt disconnected from the world’s events because we were so insulated on campus. We did recognize the severity and impact of what was occurring off campus, so your first thoughts were about the well-being of your family and friends. But then, after that, I think that everyone’s mind went to, ‘how will this moment affect me/us personally, and on campus?’ Would we still be going to be having classes? Were we all going to be sent back home? Is this country headed for war? These questions were eventually answered, and all was back to normal. That transition back to normalcy is what made me most proud about being on campus. You could see and feel that something had changed. There were noticeable changes in peoples’ attitudes, a change in ideas, a change in the commorodary, and a change in our socially connected experience that we all shared in. The people on campus became a little more friendlier, the social events became more of a melting pot, and there was a sense of pride developing about being a UC Bear. Because of 9/11, we’ll always remember where we were and who we were with when the news hit. For all of us, we were together and supporting each other then, as we still are now.

Harry Michel ’03- One of my proudest UC moments was establishing the 1st National fraternity in Kappa Alpha Psi Fraternity Inc on campus through the support of so many amazing staff such as President John Straussburger, Paulette Patton, Reverend Charles Rice, Nzadi Keita, Janean Flamer Stephanie McNulty and Ricky DiFeliciantonio.

Michael Wilson ’03 - Ursinus was a pivotal time for me. One course in particular, Prof. Ussery’s African American Experience, helped give shape and definition to the things I saw and experienced in society as an African American male. Being able to see these elements framed out and theorized by top thought leaders gave me a new lens. From then on I was able to see an issue from ground level (experience) and birds eye view (theory) at the same time. It’s the same mind set and analytic approach I use to this day as we build outreaches with Just 4 People.

Tonya Wilson ’05 - Ursinus showed me my resilience. It also taught me to find and use my voice. Memorable moments include traveling to the Furious Flower Poetry Conference with Prof. Keita, Prof. deArana’s classes where he implored us to matar a la bestia, and graduation.

What advice do you have for current students and alumni who want to address needs in their community?

Start with one simple question, “What is the need that I can fill?” At Just 4 People, we ask individuals and organizations we serve a simple question: “What do you need?” Despite life’s complexities, the answers are usually simple. They range from socks, to food, to diapers and furniture. We started small, by leaning on our family, friends, and colleagues to support the efforts of the organization. As we continued faithfully, our outreach grew. These days we have several recurring events that are true to that mission. We continue to receive support from our family, friends, and colleagues. We’ve also added major partners including Bombas, Good360, and Walmart. Just 4 People now regularly delivers winter coats, scholarships for Little League programs where mentorship is central, home furnishing supplies for people leaving homelessness, clothing, and food for those in need. In the end, no matter what the need is, asking a simple question can deliver so much relief and have an impact on someone in need. Start small… start simple.