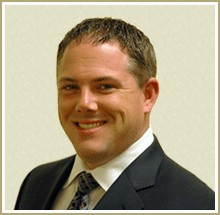 Oral and maxillofacial surgeon, James Ward ’00 D.M.D., has Ursinus to thank for his chosen profession. “I was inspired to pursue this career after being exposed to it during an internship I did as part of my elective curriculum at Ursinus,” says Ward.

Upon his graduation from the college, Ward completed a D.M.D. degree at Temple University as well as training in oral and maxillofacial surgery at Temple Hospital, serving as chief resident from 2007-2008. He now works for Pottstown Oral and Maxillofacial Surgery Associates, Inc. in Pottstown, Penn., where he treats a variety of conditions of the face and jaw.

Ward has remained involved with Ursinus, returning to campus to meet with and mentor today’s students. He advises them to “be determined” as they explore future career options saying, “Once you have found the career that makes you excited to go to work each day, don’t let anything stop you. The only thing standing in the way of your future is the work it takes to achieve it.”