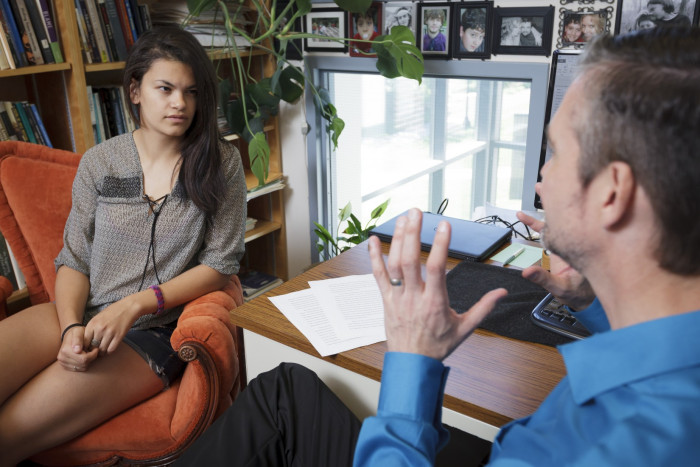 Enhancing one’s cognitive skills may seem appealing, but how ethical is the use of drugs for that purpose? Is it fair that the drugs are available only to those who can afford them? And when do the benefits outweigh the risks?

Summer Fellow Krista Snyder is weighing these and other ethical implications of the use of cognitive-enhancing drugs, such as Adderall, which is used liberally on college campuses and in the workplace.

Working with faculty mentor Professor Kelly Sorensen, assistant dean and Chair in Ethics, Snyder considers these issues a new frontier in the debate of what is morally permissible. “As new technologies arise in neuroscience, it is necessary to evaluate how to use them, Snyder says.

The pre-med neuroscience and philosophy major who is also a competitive athlete, has the opportunity this summer to explore an area where her interests merge. Snyder, of West Sunbury, Pa., is a member of the cross country and track teams at Ursinus where she holds records in the heptathlon and long jump, tutors, works at the Berman Museum, and is also in student government and Greek Life. Her eight-week research topic was introduced in neuroscience classes, and further evolved in philosophy classes.

Comments Sorensen, “We’re beginning to have the means for enhancing some forms of cognition and emotion. People have wanted to make themselves and their kids better for a long time – they already use summer camps, chess lessons, and private schools for that. Is there anything morally wrong with making people better with pharmacological means?  That’s the kind of question Krista and others are urgently thinking about.”

Among the issues Snyder is looking at is short-term side effects of cognitive performance drugs, ranging from an irregular heartbeat and shakiness to insomnia. When the drugs are taken by individuals diagnosed with Attention Deficit Hyperactivity Disorder (ADHD), the benefits to the individual are enhanced attentiveness and better processing, often allowing them to function as neurotypical individuals. But the drugs have entered the neurotypical population.

“We should first determine what health risks are associated with taking this drug,” Snyder says. Harmful benefit analysis determines the harms, the benefits and the proportion between the two. “Generally we tend to allow for small risks when the benefits are high, or the alternative has an even higher risk.” Thus, for an individual diagnosed with ADHD, the benefits of taking the drug are thought to outweigh risks.

What about a neurotypical student who wants to do better on a paper or test? Is enhancing the performance a large enough benefit that it outweighs the side effects of the drug? she asks. “If we are unable to conclude that the benefits of taking a cognitive enhancing drug are large enough to outweigh the risks involved, it is unlikely that we would accept it as morally permissible.”

Is Cost a Factor?

Another issue is access and cost. “Do those who have access to the drugs have an unfair advantage?”

And, as more people take cognitive enhancers, the standard for productivity may be raised in the workplace. “This introduces the issue of indirect coercion,” she says. “Individuals may feel pressured to take a cognitive enhancer to avoid being at a disadvantage.”

She also brings up instances where the taking of such drugs might be contributing to society, such as expanding human knowledge, or attentiveness on long military missions. “The way that cognitive enhancements benefit society may be something to consider,” she says.

“People find cognitive enhancement appealing,” she says. “Realistically, this appeal won’t decrease, and the use will continue. This is why it is important to examine the implications that these drugs have.”

While Snyder’s research may not provide definitive answers, it will most certainly initiate some essential questions.