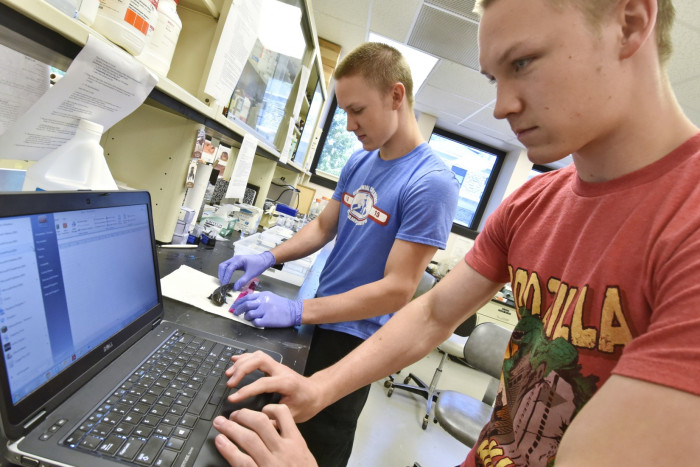 Summer at Ursinus is when selected students pursue research with faculty mentors. Summer Fellows work on projects they can truly own. Meet Summer Fellows Chris and Keven Hoogheem.
August 25, 2015

Chris and Keven Hoogheem, twin brothers from Deerfield, Ill., who are seniors at Ursinus, share many of the same interests. They are both biology majors. They both enjoy playing beach volleyball outside of North whenever possible, and, at one point, they both played intramural floor hockey. The brothers, who are also roommates, have both been wrestlers since 7th grade. As members of the Ursinus wrestling team, they initially even wrestled at the same weight class (133 lbs.), but last season Chris moved up a weight class due to need. (It should be noted that Chris wound up winning the Centennial Conference Championship at 141 lbs., beating the No. 9 ranked wrestler in the country. And Keven, who continues to wrestle at 133 lbs., was the Centennial Scholar Athlete of the Year in Wrestling.)

This summer was no different for the brothers. As Summer Fellows, they spent many hours in Professor Ellen Dawley’s biology lab in Thomas Hall conducting research on limb regeneration using Axolotl salamanders. Native to Mexico, Axolotl salamanders have the ability to regenerate fully functioning limbs, tissues, and sections of spinal cord.

Using a total of nine salamanders aged 3 months, 1 to 2 years, 5 years, and older than 5 years, the brothers compared the salamanders’ original tails to the regenerated tails. The process involved amputating the salamanders’ tails, slicing the tails into thin sections, staining them and then observing them under a microscope.

Here is where their research differed. Using a confocal microscope, Chris examined the effects of age on microglial cell response. Microglial cells constantly monitor the central nervous system for damage and foreign pathogens in order to elicit an immediate response. Previous research has shown that microglia cells are necessary in order for regeneration to occur. By amputating sections of tail that were already fully grown and sections that were in the process of regrowth, in differently aged axolotls, and examining the number of microglial cells present in both cases, Chris examined if age is a factor to consider in microglial cell response to injury.

Keven, on the other hand, used a light microscope to examine the physical traits of and look for deformities in the regenerated spinal cords. Previous research in Dawley’s lab showed that older axolotls have the potential to incorrectly regenerate the spinal cord, resulting in abnormalities. Keven compared cross-sections of both the original tail and the 1-week-old regrowth of axolotls of various ages to examine if age has an influence on the regeneration process.