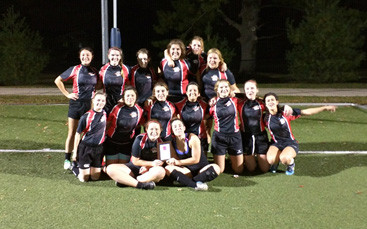 The Bears team, led by Captains Mia Serpico and Rachael Allison and Head Coach Max Friel, went 2-1 on the day and finished the season with a 4-2 overall record.

The team started the day with a very solid win over DeSales University, scoring over 40 points. The second game against Neumann University (the eventual champions) proved to be more difficult. The Bears held their own with the much larger team, but in the end Neumann came out ahead. Ursinus came back with a crushing victory over Susquehanna University in the consolation game and placed 3rd overall in the tournament. The team scored over 90 points on the day, which was the second highest of any team in the tournament.

What made the team’s performance extraordinary was that Ursinus had only 15 players for the tournament. Rugby is played with exactly 15 players, so every one of the Bears’ players was forced to play three full games with no substitutions. A difficult task in any sport, but rugby can be a particularly grueling sport. The majority of the teams in the tournament had 20-30 players and took full advantage of substitutions. Additionally, at one point during the tournament an unnamed Bears’ player received a yellow card and was temporarily suspended from the game after an aggressive hit was placed on a much larger opponent. The Bears were forced to improvise and carry on playing with 14 players for the remaining portion of the game.

Top scorers for Ursinus on the day were Mia Serpico, Rachael Allison, Kelsey Knowles, Renee Turgyan, Sam Caringi and Emily Reeve. Ms. Reeve, a freshman who stands 4’9”, was by far the smallest player on the field, yet managed to be one of the top scorers in the entire tournament. The team’s notable performance demonstrates that hard work, a positive mentality, dedicated coaching and love of sport can contribute to a successful season, despite any size advantage.