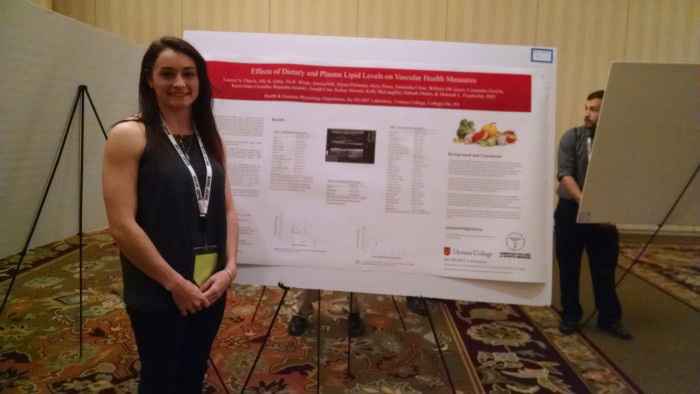 In early November, I attended the regional American College of Sports Medicine conference in Harrisburg, PA. The conference consisted of sectioned time slots where each student presented their poster and study findings. The focus of my research project was to examine for relationships between dietary lipids, plasma lipid levels, and vascular health measures. We found a direct relationship between plasma LDL and carotid artery intima media thickness. We also found a direct relationship between dietary monounsaturated fats and intima media thickness of the carotid artery. The intima thickness was obtained by an ultrasound of the carotid arteries of the neck, which is just one example of a vascular measure used in the HEART Lab. I had a wonderful time and experience while attending the conference, and look forward to other opportunities to go in the future. It was an honor and a privilege to get experience, and also to represent Ursinus College. I look forward in continuing in taking a closer look at how diet plays a role in vascular health in the upcoming year.