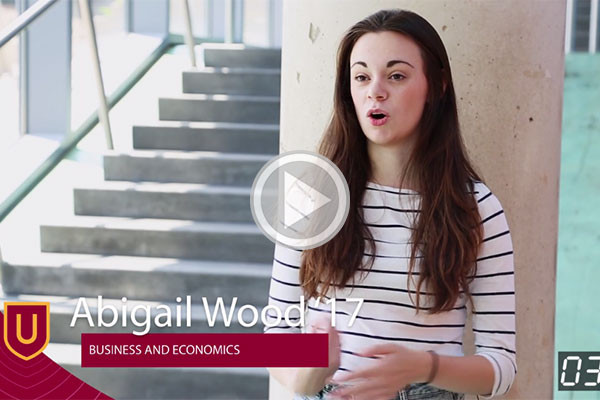 While performing research for her Summer Fellows project, Abi Wood ’17 came across a shocking piece of information.

Wood is trying to uncover some answers about the gender gap problem in the United States and is taking it a step further with her summer research, A Macroeconomic Approach to Gender Disparities in Hiring at the CEO Level.

Wood, who is performing her research with Eric Gaus, an assistant professor of business and economics at Ursinus, says given the number of women with advanced degrees, more should be leading their own companies.

“In terms of the highest glass ceilings that women are still trying to break, becoming a CEO is still one of them,” she says. “Why aren’t we getting those top positions?”

As someone who expects to enter the workforce soon and hopefully become a leader early on, Wood says that the gender wage gap can be discouraging, but she’s committed to helping to set a new standard.

“When I look at the estimated salary for any position, it might not be what I’m going to get because of the gender that I am, so it makes me stop and think, ‘What can I do to prevent these things from happening?’”

As for her summer research opportunity, Wood says it has been a significant academic experience.

“It’s liberating to be able to focus on one area of study and to attack it from all of the angles that I want to,” she says. “This project is very much data driven, and even though I’m reading a lot of economic data, it’s supplemented a lot by other areas like psychology, for example. That’s not something you get a lot of times by just taking classes. I’ve been able to piece together different fields to solve this problem.”