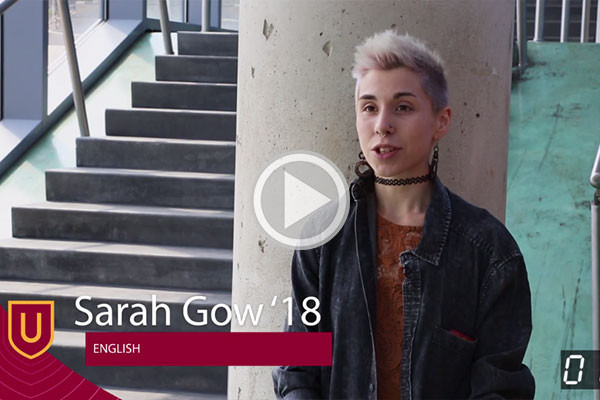 Assigned a historic character to play in a class program, Reacting to the Past, Sarah felt a connection. That connection to Mabel Dodge led to her Summer Fellows research, which, as she puts it, has the goal of “complicating” Dodge.
June 28, 2016

Dodge (1879-1962), who may be referred to as Mabel Dodge Luhan, or by one of her additional last names, is an heiress from Buffalo, N.Y., often referred to as a patroness. But Gow intends to show that she is much more – an activist, an artist, a writer, an early feminist and reformer. “She was radical even for our time,” said Gow, of Kutztown, Pa. “Her contributions are minimalized, but taken on by a male counterpart, they would not be.” She is focusing on Dodge’s time in Greenwich Village in 1912, after living in Florence and before she lived in the Taos, New Mexico artists and writers colony, where she died.

To paint a robust portrait of Dodge, Gow is working in the fairly new field of digital humanities, an area of research that intersects computing with the humanities, curating information online. “It is like a museum online,” says Gow. She is piloting the program Omeka, that may be used in a fall digital humanities class. Her summer mentor is Kara McShane, assistant professor of English, who has worked with digital pedagogy.

Digital humanities allows a person an element of self-exploration, Gow says. She is auditing a course on it this summer, and looks forward to her Summer Fellows project becoming  part of the Ursinus Digital Commons.

Gow is a bit of a renaissance woman herself. She is production editor of the Lantern (and won a prose writing prize), head of the campus Literary Society and involved in Breakaway and the improvisation acting troupe. She is also a service fellow at UCARE, a Teaching and Learning Institute student volunteer, a Campus Safety dispatcher, and  serves on the GSA executive board. Additionally, she is a member of Feminists in Action, a peer advocate and a Spanish-speaking volunteer in Centro Cultural Latinos Unidos in Pottstown.

One aspect of Ursinus she enjoys is the close relationships with professors. “I don’t think I have had a professor who I did not have dinner with,” she notes.