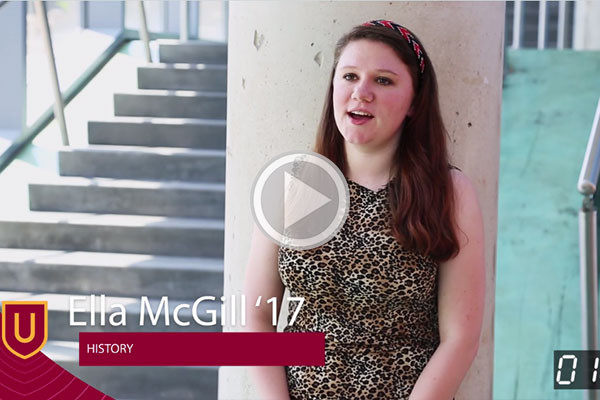 Ella McGill speaking about her travels to Uganda to study the education system
HomepageResearch and Creative ProjectsSteeped in a Culture of Making a Difference: Ella McGill ’17

Steeped in a Culture of Making a Difference: Ella McGill ’17

It isn’t every student who travels to Uganda for primary research on the education system.

Marcella (Ella) McGill called on some longstanding family connections for her project, titled, “The Pearl of Africa: British Colonialism’s Role in Ugandan Education and the Modern Repercussions for Non-Profits.”  She spends two weeks of the eight-week program in Uganda.

But McGill had always been interested in the welfare of African nations. The environment in which she grew up in Seattle, Wash. was a culture of service.  She was steeped in a culture that said “anyone can make a difference.”

Her dad is a program director for the non-profit Sister Schools, an organization that “teaches compassion, service and social responsibility by partnering students in donor schools with children in need,” according to its web site.  Sister Schools provides students the character-building experience of giving; and, provides supplies and hope to children in need. Her dad visited Uganda some 25 years ago and saw a nation struggling from a civil war with poverty and disease. He shared his story with schoolchildren and returned with donated supplies.

Ella will be talking with administrators and teacher and people who work in non-profits, exploring, for example, the challenge of speaking in a European language at school but a tribal language at home. “Although ninety-seven percent of students start primary school on time in Uganda, up to seventy-five percent of them don’t graduate from middle school,” she says.

She will interview professors at different universities who can speak to schools pushing for indigenous languages and will ask students and teachers, “What do you need help with?”

McGill was interested in attending college on the east coast, and responded to an Ursinus mail piece. She is a tutor in the Center for Writing and Speaking, a student consultant for the Teaching and Learning Institute, a student lead for Relay for Life, and the President of Phi Alpha Theta, the national history honor society.

“One of the best parts of going to college here is the different people who I would not have met otherwise,” she says. “It’s like my own study abroad experience.”

Want to follow Ella’s trip?  Check out her blog: www.pearlofafricasite.wordpress.com