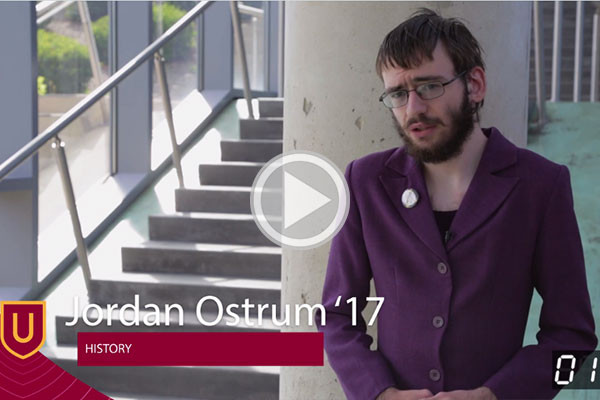 Research reflects and analyzes queer history in the United States to create a syllabus for a class on the topic.

A U.S. history course in many classrooms usually focuses on the key names and dates that helped shape history, but “does that really tell us what life was like for most people at that time?” asks Jordan Ostrum ’17.

Ostrum is a Summer Fellow at Ursinus College who is dedicating his work to shining a light on the culture and experiences of the LGBTQ community throughout 20th century United States history, a topic often overlooked in most courses. His goal is to design a syllabus that can be used to teach a course on queer history in the U.S., which he hopes can soon be taught at Ursinus.

“A big challenge is to make sure to not whitewash queer history,” says Ostrum, who is working on the project with his faculty mentor, Jasmine Harris, an assistant professor of sociology at Ursinus. “Much of the scholarship on queer history is old enough for there to be really good texts out there, but not old enough for there to be critical reflections on whose stories those texts are telling. A lot of the stories come from white, gay men. So, the struggle has been in trying to find primary source documents by black queers.”

One source that Ostrum is drawing from is Letters to ONE, a collection of unpublished letters to ONE, which was one of the first gay magazines published in the United States.

“A big part of historical research is finding not how different people were in the past, because you almost expect that, but how similar,” Ostrum says. “There’s a lot of what I might consider to be shoddy history that characterizes the gay rights movement as encompassing the last 50 years, but it goes beyond that.”

Ostrum says, “I’d rather students start to think about the past in a different way. One way that can really help someone understand society — and there’s a quote that goes something like this — is how it treats the poorly treated, which includes groups like women who are also black and who are also gay and who are also trans. I want people to be able to look at those people more deeply and frame broader historical questions about their experiences.”