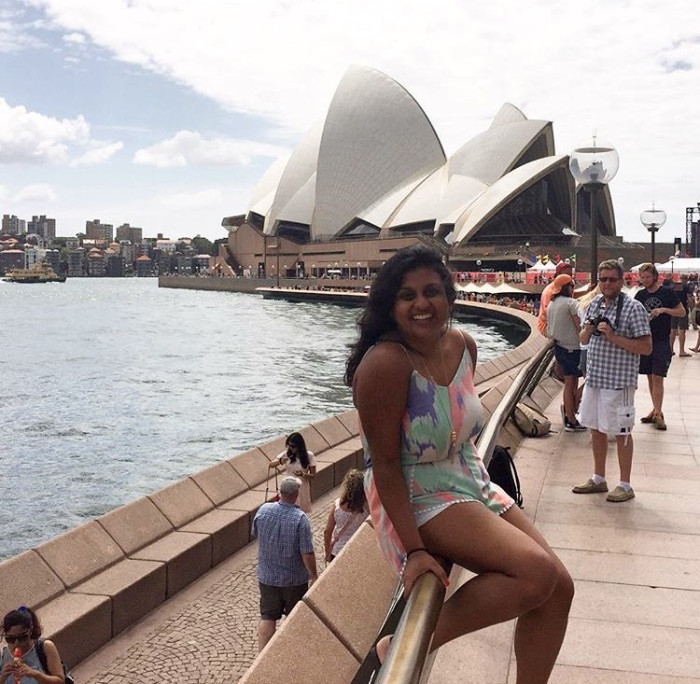 When Kisha Patel was asked about what her most memorable experience from studying abroad in Australia earlier this year was, her response wasn’t one you might expect.

It wasn’t about Australian accents, visiting the Sydney Opera House, or anything remotely native to the continent as a whole. Kisha trained and then ran in a half-marathon with her roommates. Despite an injury before the run, she persevered, and completed it. Surprising, right? But for Kisha, her experience abroad, while certainly about a cultural immersion far from home, proved more to be her entering the global community with roommates, internship coworkers, and other students.  It was about feeling at home when she was 10,000 miles away from Ursinus.

Naturally, there were a few cultural norms she had to get accustomed to in Sydney. Just ask her about Fairy bread. “It’s a piece of Wonderbread, cold, with cold butter and sprinkles. It was so weird, and I wouldn’t eat it at first, but it was delicious.” There’s also “brekkkie” meaning breakfast, which is part of the local vernacular. But the more you learn about her semester in Sydney, the more it starts to seem like it was the most comfortable experience one could ever hope for. From her internship, which was “100 percent the best thing”, and her former coworkers whom she still talks to on a daily basis. From buying groceries to cook in her apartment, to gaining a stronger sense of independence, and guidance concerning life after graduation. There were, however, a few friendly faces to ease any transitions, “I also kept meeting Ursinus people everywhere, and people thought that was crazy. I told them, it’s an Ursinus thing.”

As wonderful as her time abroad was, and as similar as some of the aspects in her life were, such as much of her academic work, Kisha noticed significant differences between Sydney and the United States. In terms of safety, there wasn’t much of a debate. “I felt safer in Sydney. There was a big terror attack in Sydney a year ago, and my office was right next to where that happened and I walked past it every day, but I still felt so safe.” She went on to say, “Everyone was just friendlier, the city didn’t feel like a city, it felt homey.” Living in Australia also made her begin to question certain values, which ultimately disappointed her when she discussed them. “I learned we have a twisted view on life in America, where we’re living to work versus working to live. Being your GPA and resumé speaks more than where you’ve been and what you’ve done, makes me sad.”

As an undergraduate student with so many extracurricular activities available at her fingertips, all on top of classes and preparation for her future, it can be easy to stay put in Collegeville and enjoy the four years on and around campus. But Kisha decided to study abroad. She left Ursinus, her home for the past few years, and flew thousands of miles away to immerse herself in a program, a city, and a way of life. And while she realizes it may be difficult, Kisha strives to now be part of that global community, and wants every Ursinus student to study abroad and experience the world like she did.