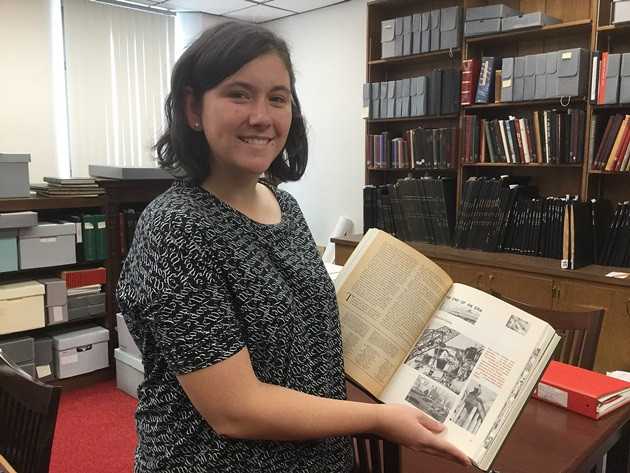 Shelby Bryant ’18 thumbs through the 1968 winter Ursinus alumni magazine and finds a photo of old Freeland Hall being torn down. Myrin Library — the very building Bryant is standing in looking through archives — would be erected in its place.

For a history major like Bryant, the peek into the past is exhilarating. It’s educational. It’s emotional.

“To look back and to see how all of these buildings have changed over time, or to see the buildings that don’t exist anymore, is something I think we all have a passion for,” Bryant says of her classmates in the Bears Make History course. “It’s really interesting to see pictures of buildings mentioned in songs or articles; a history of the school that I never got to see.”

Bears Make History is a digital humanities class in which students are shaping the history of Ursinus College through digital media. The interdivisional studies course is co-taught this semester by Kara McShane, an assistant professor of English, and Susanna Throop, an associate professor of history, as part of the U-Imagine Center’s IMPACT curriculum, which emphasizes the collaborative nature of academic disciplines.

Students in the class are working in three separate groups and are using the vast Ursinusiana collection — the college’s archives — to research different aspects of Ursinus history. Each group will curate a digital exhibition on Omeka, an open source web-publishing platform for the display of library, museum, archives and scholarly collections and exhibitions.

“The digital humanities is a rapidly growing field and part of what’s important at Ursinus now is that it helps students tap into new resources for their work,” McShane says. “It’s really connected to public history and the dissemination of other works, but it also balances teaching and practical skills. Students learn how to do original archival research, but also use the types of tools they’re going to use in their professional lives.”

The three projects are: the rise and evolution of three iconic Ursinus buildings – Freeland Hall (torn down in 1968), Bomberger Hall, and the Berman Museum of Art; the history of the Gender Sexuality Alliance (GSA) at Ursinus; and a retrospective on campus life and student reactions to two major world events 60 years apart – the Japanese attack on Pearl Harbor and the terrorist attacks of Sept. 11, 2001.

Many history lessons come from written or oral accounts of events, but at an historic place like Ursinus, buildings that have stood in place for generations have their own story to tell.

Today, Bomberger Hall might be the building most associated with Ursinus, but Freeland Hall (to those that still remember it) and the Berman Museum also stand out when painting a mental picture of the campus.

“Those three buildings I think have a very connected history and in the 1970s, the campus went through what one article called ‘the building revolution,’” Bryant says. “When Freeland Hall came down, I think there was a shift to focus on the new buildings that would come along and shape the future of the college.”

For Bryant’s group, doing the research to create a digital exhibition of these buildings has been a lesson not only in Ursinus history, but in the history of student life.

“Our project really started with this concept of Ursinus traditions,” Bryant says. “It was intriguing to look at the past and read about old traditions and how they changed and evolved, and to see buildings and their purpose as academic centers and centers for student life. We want to create history online and not just display all of this information as we see it, but to display it in a way that represents Ursinus history.”

“It’s quite a mark of distinction that we’ve had a GSA here since the early 1990s,” says Jordan Ostrum ’17. “I was curious as to how it got started and to what controversies it engaged with over the years.”

The Gender Sexuality Alliance provides members of the LGBTQIA community at Ursinus with a forum where ideas, insights and issues can be discussed and addressed, and it raises awareness of issues surrounding social equality and justice.

Today, about 20 students are active members of the GSA, which began almost than two decades ago with three members, according to a photo Ostrum and his research partner, Lauren Geiger ’17, found in a copy of The Ruby.

“In looking at yearbooks and newspapers from 1996 to 2000, I’ve found that the GSA isn’t mentioned that much, whereas now it has grown to have more of a campus presence,” says Geiger, an English major. “This is such an important group on campus and I’m excited to research more of its history and make this information more available to a wider audience through this online platform.”

Ostrum’s and Geiger’s project differs slightly from the other groups in that they are not only relying on what they find in Ursinus archives. They’re building a unique oral history of the GSA by conducting interviews with Ursinus alumni.

“I’m most interested in learning from them some of the attitudes on campus and to see really how all of that has changed in the roughly 16 years since the GSA was founded,” says Ostrum, a double major in Spanish and Gender and Women’s Studies who is a member of the GSA. “The digital humanities redefines what is possible and broadens the audience beyond academia.”

Dates That Live in Infamy: Pearl Harbor and 9/11

The attack on Pearl Harbor in 1941 and the Sept. 11, 2001 attacks in New York City and Washington D.C. are two events that had a profound impact around the world, as well as on the Ursinus community. In Bears Make History, a group of students is learning what life on the Ursinus campus was like during the days and weeks that followed each event.

“I’ve heard stories about both, but researching it firsthand has given me a new perspective,” says David O’Neill ’18.

O’Neill’s group is using the Ursinusiana archives to sift through old issues of The Grizzly, and they’ve found physical memorabilia like artwork, poetry and other written works in the aftermath of 9/11.

“I think taking all of this information and creating a narrative from it, and creating a digital database like this, will help other generations of Ursinus students understand how these events impacted Ursinus,” O’Neill says.

In addition to using the Omeka platform to build a digital exhibition, the students are blogging about their experiences and using social media platforms like Twitter and Facebook to market their projects. They also had a chance to travel to the University of Pennsylvania to view digital archives before pursuing their own projects on Ursinus history.

As Ursinus prepares to celebrate its 150th anniversary, Bears Make History becomes a unique way to bridge decades of college history together.

“It ties into our sesquicentennial in a big way and brings the past and the future together nicely, and it helps students not only connect to the past, but to the physical Ursinus community,” McShane says.

Furthermore, it gets students to think critically about Ursinus history and their place in it, a theme that resonates in Common Intellectual Experience classrooms across campus.

“It also fits in well with our new core curriculum in a really powerful way, because one of our new core questions is, ‘What will I do?’” Throop says. “That is what this course asks students. What did others do in the past, and what will you do now, as historians and as member of the Ursinus community? It’s incredibly important that students see themselves as agents in our world.” —by Ed Moorhouse