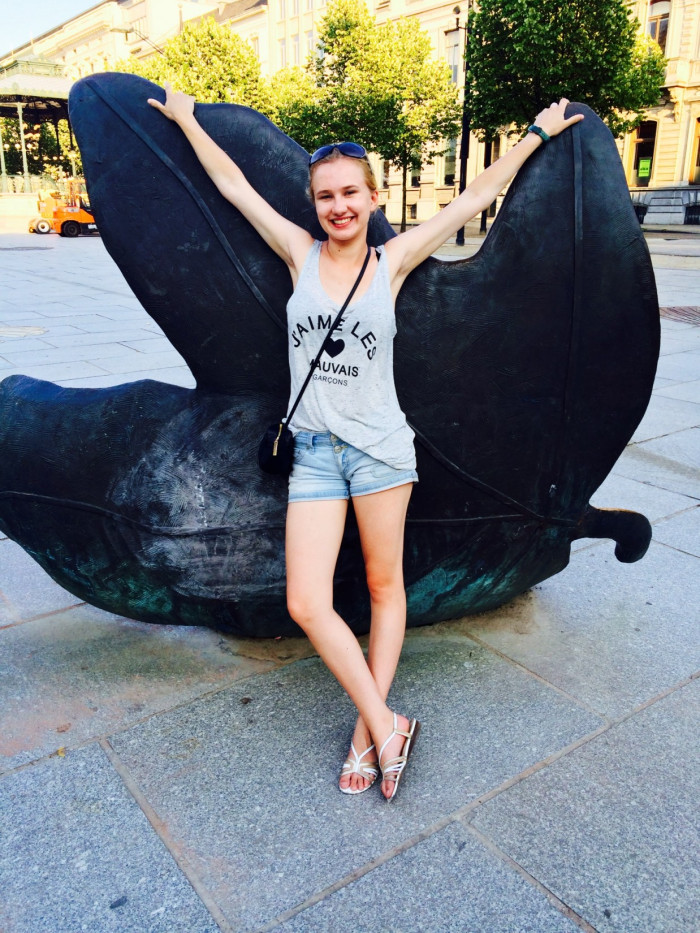 Clara Kiss, class of 2018, always knew she wanted to study abroad. Her sister did it. Part of her family still lives in Europe. Her father lived overseas after he graduated from college. As she succinctly put it, “I always expected it would happen.” While looking for the right college to attend, the study abroad programs were taken highly into consideration. “I wanted to go to a school that had a majority, or a decent number of students abroad with a well-established program.” Here at Ursinus, she’s found what’s right for her.
November 18, 2016

The Banks, Oregon native is a double major in International Relations and French, with a minor in Theater. Clara knew she wanted to go to a French speaking country, and initially thought Morocco was a top choice. But in looking at the programs there, she wasn’t sure if she could study completely in French. She had already ruled out France, as she desired more of an unexpected location. Finally, she came upon the IFE Brussels program which fit everything she was looking for.

Among the many factors that made Brussels so appealing to her is the fact that it’s the capital of Europe in an economic sense. Clara wants to apply her International Relations major, and the internship opportunities in a city like Brussels made it too incredible to pass up on.  There was also a more personal relationship to the city and Belgium as a whole. “I visited there years ago, and was intrigued by their city planning. How they’re updating it to be a modern city while trying to preserve their old city.” She went on to note that the surrounding areas of Brussels strike her as wildly interesting, with a religious divide and secession movement occurring at the same time.

Clara is looking to work with refugees or migrant workers, and wants a professional setting to do so. Her aspirations aside, she does realize there will be challenges. She will be working 40 hours a week on top of having to complete a research paper. And speaking English? Not a chance. But there are certainly bonuses to studying abroad in a Western European location. Clara plans not only to take advantage of the day trips the program offers and the week long break to potentially travel, but she can take a quick trip to Germany to visit family as well.

Coming from Oregon to Pennsylvania for college is a cross-country adventure in its own right. Now in her junior year at Ursinus, Clara Kiss is taking another life-changing journey, this time across the Atlantic. With the IFE Brussels program, she’ll form professional connections that will guide her towards a fulfilling career in the future. And while she noted that she doesn’t believe many Ursinus students have studied abroad in Brussels as of late, she doesn’t mind changing that up.