If you imbibe at The Trappe, you may not know it is the descendant of a tavern founded in 1717 by the town’s founder Jacob Schrack Sr.

You may know that Collegeville is named after several colleges located in the borough, but lesser known is that Samuel Townsend of Philadelphia wanted the town named after him, and even bribed a mapmaker to put his surname on it.

There is a lot to learn about the rich history of the adjacent boroughs of Trappe and Collegeville, where it is said cranberries grew along the Perkiomen Creek. Ursinus alumna Lisa Minardi brings it to life in a new book, “Trappe and Collegeville, part of the Images of America series published by Arcadia Publishing and The History Press.

Author Minardi ’04 will give a presentation and sign copies of the book in Myrin Library, where she studied as an Ursinus student, Feb. 22 from 4 to 6 p.m. Light refreshments will be served. All proceeds will go to the Trappe 300 Steering Committee for various anniversary projects. 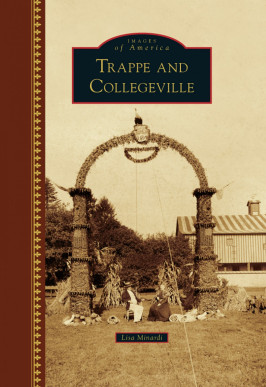 Minardi grew up in Montgomery County. Her interest in local history was piqued at an early age when she attended a colonial crafts day at the Peter Wentz Farmstead in Worcester, Pa. In 2003, as a history major and first museum studies major at Ursinus, she became involved with efforts to save the historic Trappe home of Frederick Muhlenberg – now called The Speaker’s House. Working at the Berman Museum inspired her to pursue a museum career, and she returned there as a guest curator in 2011 for the exhibition Pastors and Patriots: The Muhlenberg Family of Pennsylvania, and wrote a book to accompany the exhibit.

She earned a master’s degree in Early American Culture from the University of Delaware in a joint program with Winterthur Museum, where she then worked as an assistant curator for ten years. The author or co-author of seven books and dozens of articles, Minardi is currently pursuing a Ph.D. in American history at the University of Delaware. She is internationally recognized for her expertise in Pennsylvania German art and culture, and is a consultant for the upcoming exhibit The Luther Effect at the Deutsches Historisches Museum in Berlin.  She is executive director of The Speaker’s House and co-chair of the Trappe 300 Steering Committee, a collaborative of various Trappe and Collegeville nonprofit organizations and residents.

She is currently organizing the exhibition Revolution at Home: The Muhlenberg Family of Pennsylvania, which will open April 9 at the Henry Muhlenberg house in Trappe.– By Wendy Greenberg