February 5, 1817 was the beginning of Ursinus College and a  man that would help shape the future for thousands of students. John Henry Augustus Bomberger would be a name that was to live on for generations to come.

During the recent weekend of February 4 and 5, two hundred years after the college’s start, the entire Ursinus community took the time to celebrate the man who started it all, his beliefs on education which the college still holds true today and the many friendships and relationships that have been, and will continue to be, formed for years to come.

In preparation for such a momentous occasion, the college helped to prep alumni, faculty, friends and family with “Bomberger Birthday Boxes.” From San Jose, Calif., to Arlington, Tex., from Kissimmee, Fla. to Arlington, Va., from New York to Ottawa, Canada, in all, 68 boxes were sent to help with party preparations. Celebrations were held in various locations including Center City Philadelphia bars, homes of alumni and friends and Trinity Church on Main Street in Collegeville. There was even a party held in Israel!

Graduates from every decade from 1956 to 2020 gathered to remember all the fond memories they created on campus and a few of these party goers even shared their stories with me! 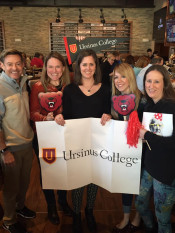 Jessica (Holt) Smalarz ’04 shared in her celebration on Saturday, February 4.  She, along with alumnae Jennifer (Guido) Pettia ’04, Fallon Szarko ’04 and Jennifer Ludwig ’03, met for lunch at City Works in King of Prussia to catch up and celebrate Founders Day. While they were getting dressed up with the hats from the box, and holding up the pennant and sign, they were surprised when President Blomberg stopped over to introduce himself and pop in for a photo! As a group of friends and sorority sisters, although they were missing Quinn (Dinsmore) Bryner ’04, Elizabeth (Drobit-Blair) Conley ’04 and Meghan Rooney ’04, they have been getting together since graduation for events big and small. As always, they were thrilled to celebrate Ursinus together and continue to build upon their lifelong friendships. Out of the group, the college has produced two Ursinus marriages and two, soon to be three, hopefully future alumni!

Another successful Founders Day story was shared with me by Erika Tama ’13. She and a group of Ursinus grads and friends (Matt Glowacki ’15, Jeff Endy ’15, Hunter Shull ’15, Dixon Speaker ’13, John Carty ’14, Kelsey Schaffer ’16, Jerry Rahill ’14, Andrew Fiorentino ’14, Greg Fontaina ’13, Ryan Lynady ’14) had fun with all the goodies the box had to offer.  Just as she had hoped, Erika’s box came just in time as the group was about to get into the car to go to their annual Pocono weekend. The party goers said “It was very cool to bring [together] a group of us who are all friendly, but to bring [all of us] together and honor Ursinus and remember the place where our friendships started, gave it an even greater meaning”.

The same box that made it to the Pocono retreat was used again at a second party held in Erika’s apartment. While this party also boasted alumni attendees, it took on an additional meaning as many of these guests are members of Erika and Andrew’s bridal party. The couple, along with their guests, took some trips down memory lane and added in some wedding prep, including bridesmaid dress shopping and groomsmen tux fittings. Of course, it was more than the trivia in the box or the party hats (which have now found permanent spots in their homes) that made for a special day, but also the love and laughter that Ursinus helped to facilitate. In a few short months, their wedding day will be filled with these important people who will likely continue to play a large role in the rest of their lives.

So, with these anecdotes it’s clear to see that whether it’s Founders Day or not, gatherings and celebrations are common among our many alumni across the country and across decades of graduates. All of these get-togethers continue to build on the college’s rich history, values and promise to continue the wonderful traditions of celebrating the place where it started. Happy Birthday Ursinus, and on behalf of the entire Ursinus Community, thank you.  Cheers to many, many more!