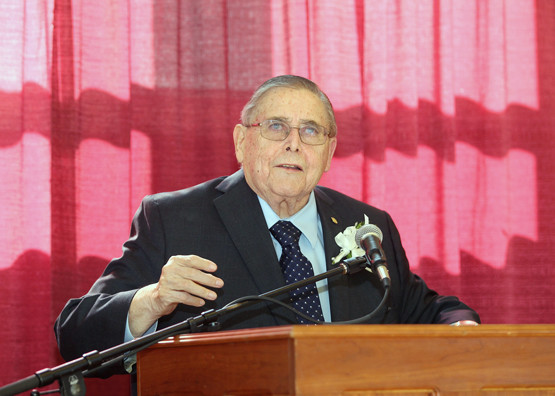 The Rev. Dr. Harold C. Smith ’55, a longtime member of the Ursinus Board of Trustees and champion of Ursinus College, died in hospice Tuesday night at Lutheran August Medical Center in New York City.
March 23, 2017

As we mourn the death of Rev. Dr. Smith, we celebrate his life of service, and we praise his business acumen, his generosity to Ursinus College and his adherence to the values of the importance of the spirit and of lifelong education. He is an example to us all.

Rev. Smith began his career with the YMCA Retirement Fund in 1958, and rose to become president, CEO, and chief investment officer in 1983. During his 17 years in that leadership position, the fund experienced unprecedented growth in membership and assets under his management. In 2001, he was enshrined in the YMCA Hall of Fame, which is located at Springfield College, where he was also a member of the board of trustees.

At Ursinus, a foundation was laid on which he built a lifetime of service. An undergraduate with many talents, he majored in economics and history and was editor of The Lantern literary magazine. In a 2012 interview, he noted that the Ursinus emphasis on reflection was a great influence on him. He fondly recalled studying in Freeland Hall. A Freeland “bell ringer,” he recently asked about the bell, and received just the other day a photo of the bell (currently displayed on Myrin’s second floor) and a copy of an article he wrote about bell-ringing for The Grizzly back in 1953.

Rev. Smith graduated from New York University with a master’s degree in business and was ordained after studying at Union Theological Seminary. From 1958 to 2000 he served as voluntary senior pastor of the Unity Hill United Church of Christ in Trumbull, Conn.

Rev. Smith supported not only the Board Challenge in memory of former President John Strassburger but also the Taking Our Place Campaign in 2007. As a result of his generous support of Ursinus College, a Kaleidoscope rehearsal studio bears his name. More recently he established The Rev. Dr. Harold C. Smith Endowed Chair in Christian Studies, which supports a faculty member and fosters scholarship and teaching.

We will miss Harold at our New York alumni events, and we will miss his wisdom and his commitment to the values of Ursinus College.