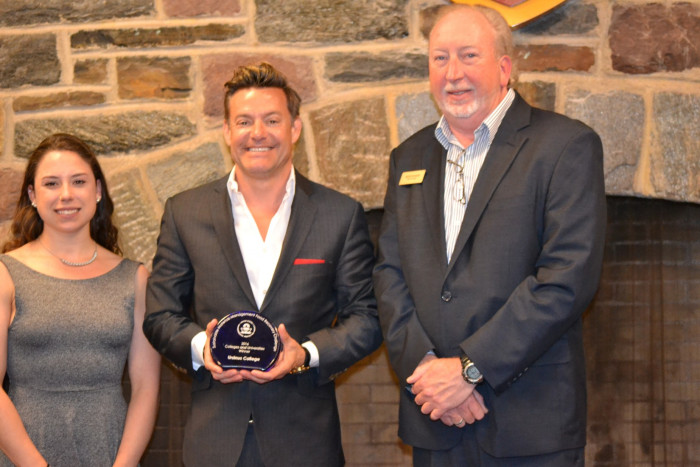 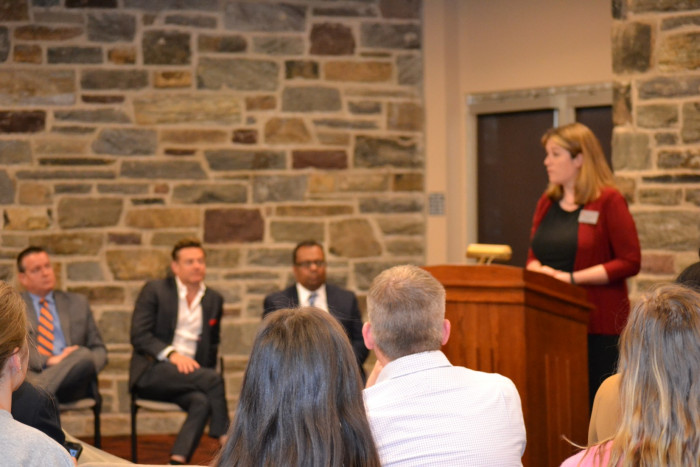 Environmental Protection Agency (EPA) representatives were on campus to laud Ursinus as a national winner for reducing food waste
April 18, 2017

The EPA announced last fall that Ursinus was one of 13 organizations and businesses that have documented the highest amounts of food waste diverted from landfills in the EPA’s Food Recovery Challenge. Ursinus is the winner in the Colleges and Universities data-driven category for achieving the highest percent increases, comparing year to year data.

The achievement is the result of the work of student volunteers, Ursinus College Dining Services, the Environmental Studies faculty and a host of supportive college administrators.

During the campus ceremony, Wismer on Wheels President Vanessa Scalora described the effort of the student organization. During each shift, she said, students repackage unserved leftover food , which is cooled, wrapped, labeled, and weighed. It is donated to Manna on Main Street in Lansdale which is a non-profit community soup kitchen and food pantry.

“It is so rewarding to know the extent that our work helps people in the community before you even factor in that this food is also contributing to environmental sustainability because it would otherwise end up in a landfill,” said Scalora, who thanked the college for a renewed sustainability office. She added that Wismer on Wheels doubled its volunteers from the previous year and gained more student volunteers this spring.

Sodexo, the company that manages Ursinus Dining Services, is also a national winner, in the narrative leadership category.

The successful reduction in food waste was the result of several broad initiatives, including students, faculty and staff who raised awareness of food waste and instituted measures to reduce it. Diversion efforts include food waste reduction, food donated in the community by student volunteers such as Wismer on Wheels, recycling, composting and waste to energy efforts, all processes that divert waste from landfills. – By Wendy Greenberg