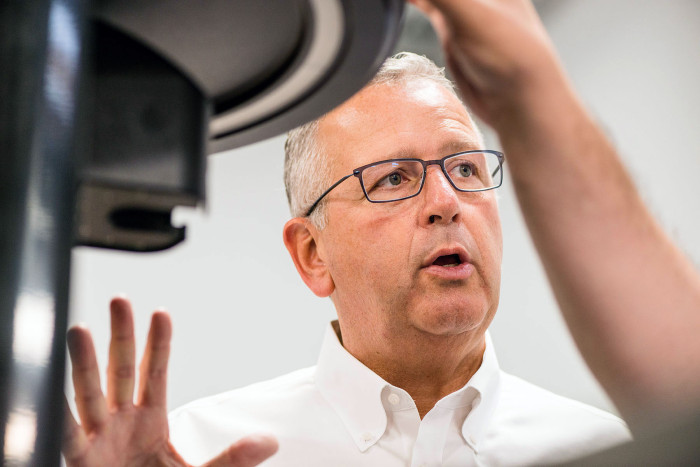 The honor recognizes the achievements of individuals in the arts and humanities, environment, the human condition, public policy, technology, the economy and employment.

DeSimone, a former member of the Ursinus College Board of Trustees, was selected for his achievements in developing and commercializing advanced technologies in several cutting-edge fields such as 3D printing, precision medicine, nanoparticle fabrication and green chemistry.

The award also recognizes his commitment to diversity in the STEM fields as a “fundamental tenet of innovation,” according to the Heinz Family Foundation.

Established by Teresa Heinz to honor the memory of her late husband, U.S. Senator John Heinz, the Heinz Award celebrates his accomplishments and spirit by recognizing the extraordinary achievements of individuals in the areas of greatest importance to him.

DeSimone is noted for the recent breakthrough development of CLIP—a new approach that is moving 3D printing into large-scale 3D manufacturing for the first time—and for PRINT, a soft lithographic technique that uses the tools of the computer industry to fabricate tiny nanoparticles out of pure pharmaceutical ingredients for precision delivery of vaccines, pain treatment and cancer therapeutics.

An innovative polymer chemist who made dry cleaning sustainable, he is known for his ability to apply insights in materials science to create advances in medicine, as well as other fields. Dr. DeSimone has more than 300 publications and holds more than 180 patents, which have led him to found multiple companies based on his work.

In May 2016, DeSimone received the National Medal of Technology and Innovation—one of the nation’s highest honors for achievement and leadership in advancing the fields of science and technology—during a ceremony at the White House presided over by President Barack Obama.

Other recipients of the 22nd Heinz Awards this year include Natasha Trethewey, Angela Blanchard, Gregory Asner and Dr. Mona Hanna-Attisha. The award winners collectively “represent the vision, creativity and determination that produce achievements of lasting good and meaningful impact, which the Heinz Awards hopes to inspire,” according the foundation.