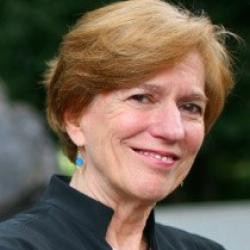 Renowned Scientist Speaks in Support of GMOs in Farming

Picture our world, the future home of 10 billion people. Currently our planet has comparatively fewer – just 7.5 billion – but the resources necessary to feed them all are nothing short of extraordinary. Farming is not the ubiquitous vocation it used to be, and for good reason: We’ve simply gotten better at it.

As technological improvements have dramatically increased the productivity of a single farm, people have migrated to densely packed urban environments. Our population, concentrated in cities, is soaring. The big question facing our current and future generations are: Can we feed them? And will we?

On Tuesday, September 12th, the Parlee Center for Science and the Common Good hosted Distinguished Professor Emerita Nina Fedoroff for its first speaker series event of the 2017-2018 academic year.  Dr. Fedoroff visited Ursinus to address the issue of food production in a world of 10 billion people. Central to her talk was the controversial use of genetically modified organisms (GMOs) in agriculture, which is the theme of this semester’s CSCG events.

Dr. Fedoroff is a renowned scientist in the field of plant genetics, as well as the former science and technology advisor to the US Secretary of State. Her lecture on Tuesday addressed growing public concern surrounding the use of GMOs in science and medicine. Dr. Fedoroff’s stance is unequivocally in support of using genetically modified organism in agriculture, as it simply isn’t possible to produce enough food for 10 billion people with our current farming technology. She said, “GMOs are the latest in our crop modification technologies…Genetics has been a part of our ability to increase food production for many centuries, and most dramatically in the 20th century.” She continues to explain that in the span of a single century our population has grown from just 2 billion people to over 7.5 billion people. But despite that population growth, “we’ve managed to reduce the fraction of humanity that was always hungry from about half to just a sixth.”

Though GMOs provide some clear benefits, many are still hesitant to accept them, as there are still concerns about the personal and ecological health consequences of using GMOs. Dr. Fedoroff cited a 2016 report by the Natural Academy of sciences in her lecture that found no scientific evidence of harm to either human or agronomic health by the use of genetically modified crops, but still this anxiety persists.  She noted that fears over the safety of GMOs are largely the work of activists and organic food producers, each of whom benefit financially from the organic farming industry.

Despite public hesitation, Dr. Fedoroff continued to advocate for the use of GMOs. She explained that genetically modified organisms could be most beneficial to humans by enabling us to win the fight against other organisms during the process of food production. Dr. Fedoroff remarked, “We can replace a lot of the chemicals that we use by making plants resistant to diseases and pests. Insects and animals are our biggest competitors; if you make the plant resistant biologically – and that’s where genetic modification comes in – [it] can help us increase [production] and make it more sustainable, with less chemicals, and less land. It’s all possible.” Substantial amounts of food are lost each year to sources which may be overcome by genetically modifying our crops. Dr. Fedoroff argues that in a future world with 2.5 billion more people than today, the use of genetic modification technologies is essential to producing enough to feed everyone.

Ultimately, this is only the beginning of an extensive conversation about GMO use, a conversation that raises many questions and concerns: Questions regarding the role of big agribusiness in developing and distributing GM technologies, the true consequences of genetic resistance to pesticides and herbicides, product- vs. process-focused regulations, humanity’s authority in powerfully changing nature by enacting heritable genetic changes, and others are open to consideration with our speakers and with each other.

Large, complex issues of global food injustice and the role of science in shaping society are necessarily difficult, and demand a collaborative, dialogical approach to solve. Constructive discourse over such issues is a central mission of the CSCG, and we plan to continue this campus-wide discourse throughout the semester. The next speaker in our fall series will be Professor Dave Mortensen, who will bring a different perspective and discuss the dismal potential for GMOs to create new types of “super-weeds”. Please join us on Monday, September 25th at 7pmin Olin Auditorium to continue this conversation with Dr. Mortensen. –By Ben Allwein and Alexa Beacham