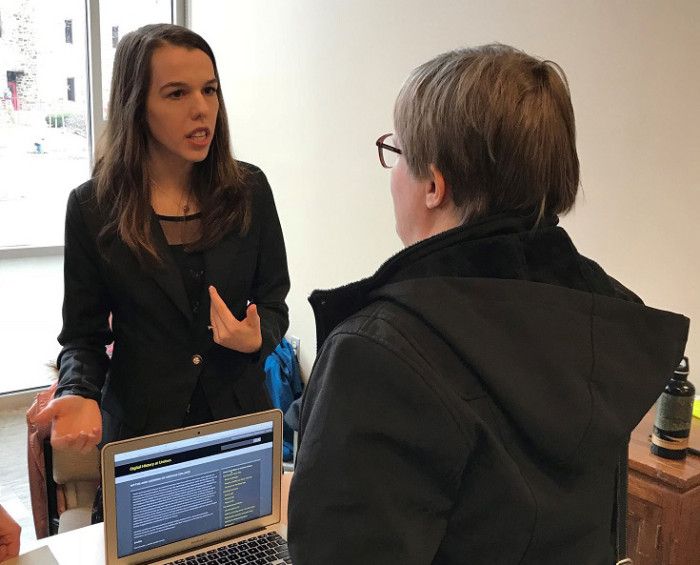 Students shared their projects with the campus community during the official Bears Make History project launch. 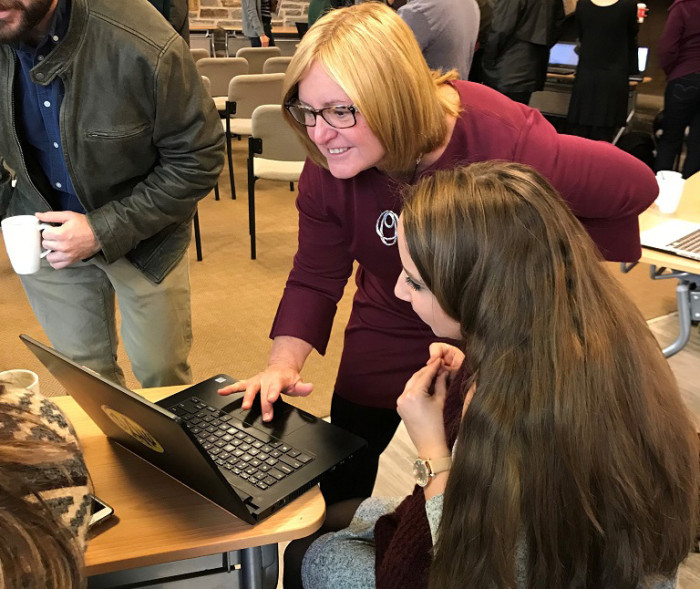 In its second year, the groundbreaking, interdisciplinary Bears Make History class introduced a new group of students to the history of Ursinus, culminating in an official project launch on Dec. 8.
December 08, 2017

Participants in the digital public history course—which combines a 200-level English course and a 200-level history course—were given access to the Ursinusiana archives to look through primary sources that showed how the community and college have changed over the years. It is co-taught by Susanna Throop, an associate professor of history, and Kara McShane, an assistant professor of English.

“We got complete access to the archives and we were able to pull whatever we wanted out of there, take a look at it, read it, transcribe it and then post it on our Omeka site,” says Daniel Berger ’18 “It was a great experience digging for information and then synthesizing all of that information. I really like how this course made us employ those history skills to take a look at the place we’re actually studying. Overall, it was a great class and I like that it culminated in this launch of our projects where people were able to view the sites for the first time and explore the narrative.”

Students collaborated in five teams to research their topics of interest. During their public presentations, each group provided a brief introduction to their research before inviting members of the entire campus community to explore the projects in more detail on websites created using the Omeka web-publishing platform. Each group created its own detailed website with pictures, analysis and interesting historical anecdotes surrounding their topic. Others had physical artifacts, such as Ursinus yearbooks and brochures, which gave audience members greater insight into the projects.

The five different teams covered a wide variety of topics and decades. The aptly named “Bears with Booze” group researched and discussed how students became involved in shaping the college’s alcohol policy changes in the 1970s and 1980s when student opinions clashed with existing Ursinus policies.

“No More Blue Skies” covered the 1920s and 1930s on campus and the political, financial and social climate of the school. Their research uncovered school spirit, themed parties, near bankruptcy and changing political views on campus.

Several Ursinus myths and legends were analyzed by another group that visited hidden locations on campus, including the long-forgotten radiation labs in Pfahler Hall, researched ghost stories surrounding residence halls, and examined the history of the Ursinus Peace Tree. The tree was a source of controversy on campus when it was planted in 1969 with a scroll containing the names of the Collegeville soldiers who lost their lives during the Vietnam War.

The final group showcased their research with a project titled “Reading between the Letters.” It focused on the experiences of marginalized groups within the Ursinus Greek community since the 1960s, featuring information on gender inclusion and racial diversity in fraternities and sororities on campus.

(Leah) Jarvis ’18, who combined science and history disciplines to research the Pfahler radiation labs, said, “It was one of the most incredible classes I have ever taken. I’ve taken a few history courses before and it’s not in my major so I don’t have a super strong background in it. That’s what made it most impactful for me. It was that I could come from a scientific background and really get into it and I could choose what to do. Being able to have the opportunity to work on something like that was the best part for me. I learned so much about not only resources, but the college in general and how I saw the college.” —By Mary Lobo ’15