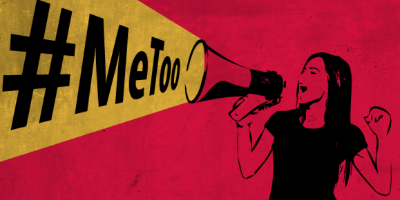 Two members of the class of 2018 had poems accepted in the Philadelphia Says #MeToo anthology.
February 28, 2018

Rae Hodenfield and Robin Gow had works accepted into an anthology about unwanted sexual acts and the #MeToo movement. Moonstone Press, run by literary activist Larry Robin, is the company that offered this opportunity for poets to express their experiences with sexual harassment. To showcase the anthology, called Philadelphia Says #MeToo, there was a book release party and reading that took place at Fergie’s Pub on Sunday March 11, 2018.

Gow ’18, described what happened at the event. “Basically the organizer of the Moonstone art’s center gave an opening thanking Taranna Burke who started the #MeToo movement in 2006.  I was really happy he did that because there were actually women at the event who didn’t know that #MeToo was founded almost over a decade ago. There were people there who were friends with Burke so that just shows the wide array of people who presented. After the opening remarks, we read aloud from the anthology on a little stage there.”

Gow said how “going to a reading with all sorts of different poets of different ages actually helped [him] visualize and understand that #MeToo isn’t really as cohesive as it might seem from the surface, and [he thinks] that’s what’s powerful about it. Poetry and writing (and art in general), [he believes], are fundamental for social change.”

Congratulations to both Rae and Robin for attaining this honor!