Cristin Mathew ’06 is an orthopedic surgeon and sports medicine fellow at Houston Methodist Hospital. He was a team physician for the world champion Houston Astros during the 2017 season.

You were one of the team physicians for the world champion Houston Astros during the 2017 season. Tell us about it.

It has been a dream come true. I always dreamt of being on a team that wins a world championship. I knew that I would never play in the game, but to be a part of the awesome medical staff, train under the best and brightest surgeons, and work with world-renowned athletes with the newest and coolest tools and modalities has been more than I could ever hope for. I covered the American League Championship Series Game 2 and World Series Game 3. It was amazing; the energy and excitement were truly contagious and helped unify and empower the city after Hurricane Harvey. Experiencing the first World Series game win ever at home in Houston was a remarkable experience. I also work with the Houston Dynamo, Houston Texans and Houston Rockets, and for their games, I am on the sidelines. I have to be able to run on the field or court if anything happens.

Do you think living through Hurricane Harvey made the World Series victory even sweeter for Houston fans?

Definitely. The hurricane brought about a lot of devastation in the area. Despite all the destruction, Houstonians united to start bringing the city back to its feet. The sports culture in Houston provided an avenue for Houstonians to get away from the destruction and rally behind their city. The teams also made huge efforts on and off the field to help those who were displaced by the storm. Right after the hurricane, the Astros made the move to bring (star pitcher) Justin Verlander to Houston. The Astros were doing well during the regular season, but when Verlander came, it further solidified their ability to make a strong playoff run. The hope of the city grew with that.

Do you get starstruck working with the pro athletes?

Absolutely, but you have to step back and be objective. I have to do my job so they can do their job. Of all the sports teams I work with, I got closest with the guys on the Astros. Pitcher Charlie Morton and I have had fun talking about Philadelphia—he played for the Phillies before coming to Houston. We spent a good amount of time talking about cheesesteaks. It’s nice to know some of these athletes as people, and not just athletes.

Tell us about your path from Ursinus to Houston.

I did a post-baccalaureate premedical program at Drexel University prior to going to Via College of Osteopathic Medicine (VCOM) in Virginia for medical school. I chose VCOM because I got the unique opportunity to work with Virginia Tech athletics while I was there. This was an experience that a lot of other medical schools don’t offer. I did my residency in orthopedic surgery at Northwell (formerly known as North Shore-Long Island Jewish) Health in New York. After five years of residency, I wanted to spend an extra year in sports medicine and arthroscopic surgery training, so that is how I came to Houston.

Seems like you always knew you wanted to work in sports medicine.

I always knew I wanted to be a physician; however, I didn’t know what kind. Growing up just outside of Philadelphia, I graduated from Radnor High School and played football. During the last game of my junior year, I tore my ACL and had multiple surgeries to reconstruct my knee. My orthopedic surgeon walked me through the process and had me back on the field ready to play and be captain my senior year. I loved that he patched me up and got me back doing something I loved. I knew then I wanted to do that for other athletes, too.

What’s your most important tool as an orthopedic surgeon?

Do you have a typical day in Houston?

During the day, I alternate seeing patients in the office or training room and being in the operating room. In the evening, I cover games. Through my fellowship at Houston Methodist Hospital, I work with high school athletes, Rice University athletes and also all the Houston pro teams. 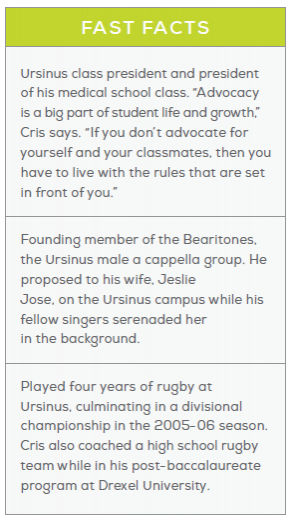 How do you juggle an athlete’s desire to get back on the field while making sure he or she is absolutely healthy enough to do so?

There are a lot of things you are juggling, especially with the athlete’s expectations, family expectations and the team and coaches’ expectations. The good thing is that I am working alongside athletic trainers, physical therapists and other physicians who help to determine what is best for the athlete. When it comes to deciding if and when to do surgery, there are a lot of things we take into consideration. Some of the things we have to consider are whether the injury could hurt them through the rest of the season, their career or lifetime, and whether the injury can be managed with nonoperative measures like medications, braces and physical therapy. The player’s goals and desires are the utmost deciding factor, however it’s our job as physicians to provide them the options and explain to them the risks and benefits of each.

What will you do once the fellowship comes to an end?

Once the fellowship ends, I hope to be gearing toward an academic sports medicine practice. I really enjoy teaching, and I hope to eventually have the opportunity to teach and inspire the next generation of physicians. I feel that I can make the greatest impact with research and helping to produce future surgeons.

That’s a tough question. I can truthfully say that I do pull for my Philly teams, but being born in Houston, I’ve always kept my Texas roots, so my Houston teams are where my loyalties lie.