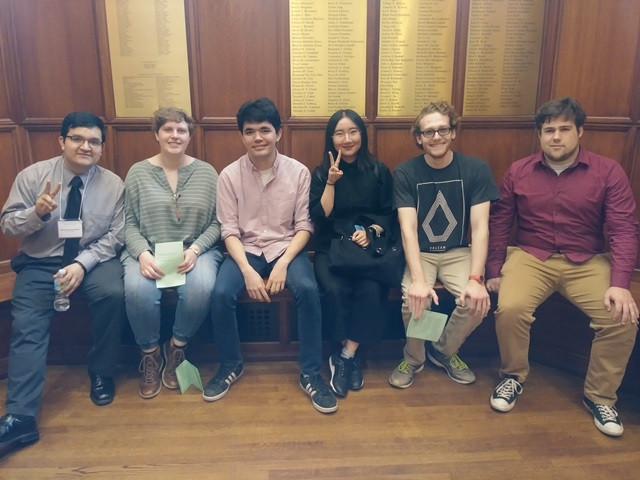 Two Ursinus students presented papers and two participated in a study-abroad roundtable at the annual undergraduate research conference of the Greater Philadelphia Asian Studies Consortium. One student, Rosendo Lopez-Duran, was awarded a prize for one of the outstanding papers at the conference.
April 16, 2018

On April 14, four Ursinus students participated in the annual undergraduate research conference presented by the Greater Philadelphia Asian Studies Consortium (GPASC). This year’s conference was held at the University of Pennsylvania. One student, Rosendo Lopez-Duran, was awarded a prize for one of the outstanding papers at the conference.

Rosendo Lopez-Duran (Philosophy/EAS major, ’18) and Jake Nop (History major, ’18) presented research that they are currently conducted under the supervision of Associate Professor Matthew Mizenko. In his paper, “Japan’s Invisible Race: Discrimination, Untouchability, and Identity,” Lopez-Duran presented research on burakumin (outcastes) and other minority groups in Japan from his honors thesis for the East Asian Studies major. In “‘To See with Eyes Unclouded:’ Shinto, Curses and Reconciliation in Mononoke Hime, “Nop discussed his research into animism, spirituality, and the relationship of humans to nature in  the animated film, known as Princess Mononoke in English, directed by Miyazaki Hayao.

Luke Paustian (International Relations/East Asian Studies major, ’18) and Xinyun (Lydia) Zhang (Psychology/East Asian Studies major, ’19), participated in a roundtable discussion on experiential learning conducted in Asia. Paustian spent several months working in an all-Japanese environment in an shopping mall food court near Akita International University (AIU), where he studied as an exchange student in 2016-2017. This employment–very unusual for study-abroad students in Japan–helped him make great progress in his linguistic ability while giving him first-hand experience of Japanese society and culture. Zhang reported on her trip to Tokyo and Kyoto during spring break, at which time she was able to participate in Zen meditation sessions at famous Japanese temples. This experience has added greatly to her capstone project in East Asian Studies on zazen (Zen meditation) from both a scientific and a cultural perspective.

GPASC is a consortium of 13 colleges and universities in the Philadelphia area that work together to support Asian Studies, ranging from West Asia to Japan, and also including the Asian Diaspora. Matthew Mizenko, coordinator of the East Asian Studies Program at Ursinus, is currently serving as chair of GPASC.