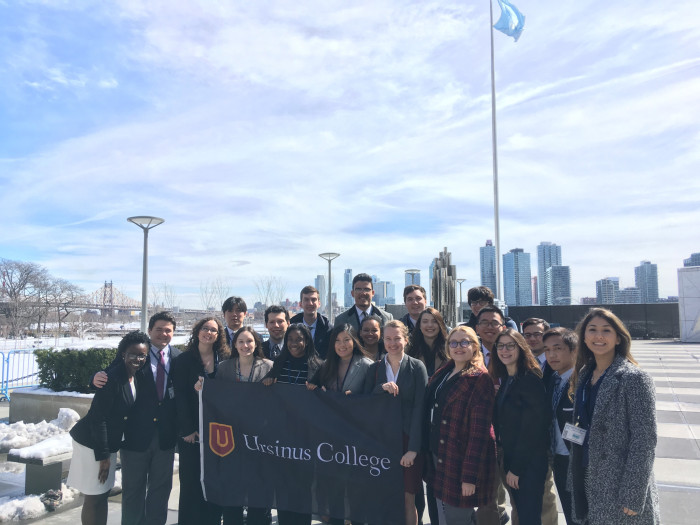 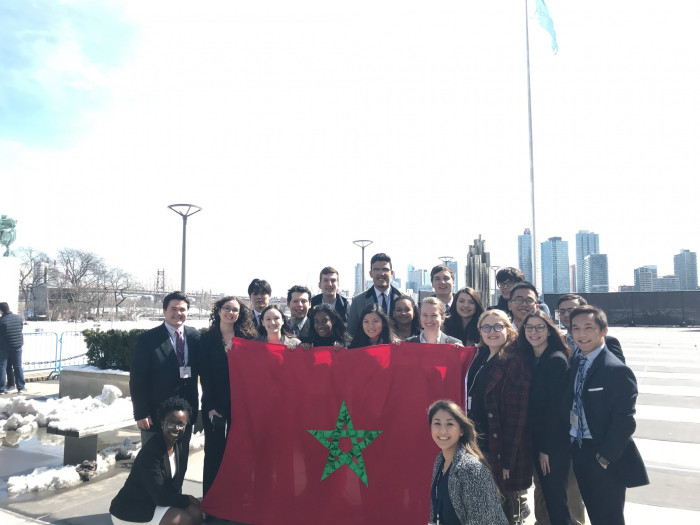 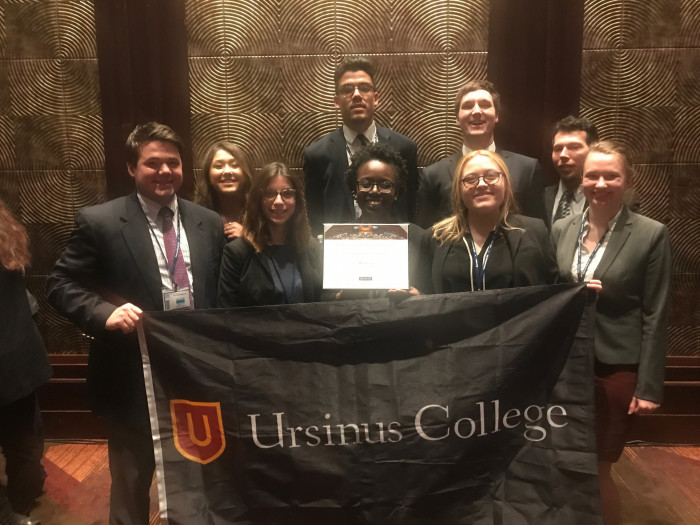 21 students participated in one of the world’s largest MUN conferences
May 02, 2018

From March 18-22, 2018, a delegation of 21 Ursinus students participated in the National Model United Nations conference in New York City. This conference is one of the largest Model UN events in the world, attracting over 5,000 student delegates from all continents and receiving press coverage in the United States and abroad. Ursinus has a long tradition of sending delegations to NMUN, going back to the late U.S. Ambassador Joseph H. Melrose Jr. ’66.

This year, the students represented the Kingdom of Morocco during the simulation. At Ursinus, the delegates had prepared since September 2017 to learn about the domestic and foreign policy of Morocco and about the history and competencies of the UN committees to which they were assigned. Mary Atta-Dakwa ’18 led the group as a Head Delegate and coordinated negotiation strategies and policy priorities. To round off the preparation, the students met with members of the Moroccan Mission to the United Nations before the start of the conference to receive a detailed briefing about Morocco’s policies in negotiations at the UN.

As a special opportunity, the students were also invited to the United States’ Mission to the United Nations to meet with Carolyn Strainic (UC ’11). Strainic was a delegate representing Ursinus at the NMUN conference during her time as a student and has since become a “real” diplomat, working as an Advisor at the U.S. Department of State with a posting at the U.S. Mission to the UN. During this meeting, the students gained fascinating insights into the intricacies of diplomatic negotiations, career paths in foreign policy, and current U.S. foreign policy priorities.

During several days of intense negotiations, the Ursinus delegation was able to contribute meaningfully to resolutions in ten different committees. Topics under negotiation ranged across a diverse array of issues from environmental migration to cybersecurity and sustainable urbanization. On the last day of the conference, the students participated in a guided tour of the United Nations building.

The students’ lengthy preparation and collaborative efforts at the conference led not only to successful resolutions that earned majority votes in all committees. The NMUN conference organization recognized the work of members of the Ursinus delegation with four awards:

Students unanimously reported that preparing for and participating in the conference offered them unique insights and benefits:

Ursinus students from any major can participate in Model United Nations. The program is coordinated by the faculty advisor, Dr. Johannes Karreth, an assistant professor of Politics and International Relations.