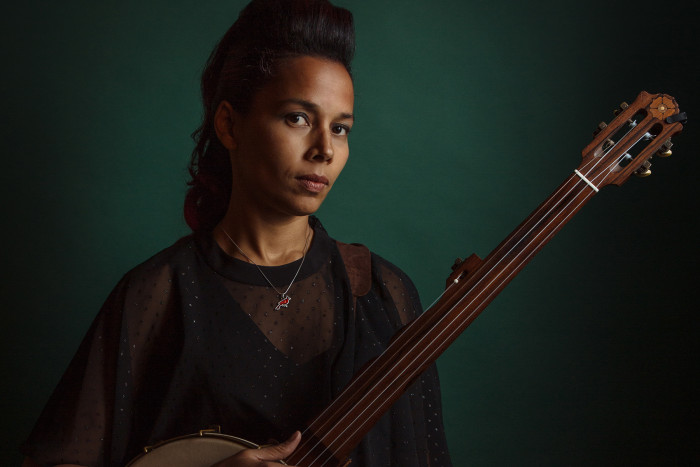 The acclaimed singer-songwriter, noted for enriching the understanding of American music, will address the class of 2019 on Saturday, May 18. She will receive an honorary Doctor of Humane Letters.
January 23, 2019

A recipient of a 2017 “Genius Grant” from the MacArthur Foundation, Giddens was called “the 21st Century’s revelator” by National Public Radio and has made a career out of revitalizing and invigorating music reflecting the African American experience.

“We’re honored to welcome Rhiannon Giddens as our 2019 commencement speaker,” says Mark Schneider, vice president of academic affairs and dean of Ursinus College. “In addition to a distinguished career, she exemplifies informed and ethical decision-making, a hallmark of our open questions core curriculum. Rhiannon Giddens, one may well argue, was recognized by the MacArthur Foundation precisely because of the choices she has made in her professional life, informed by continued learning and close attention to the ethical dimensions of her own work.”

In her recordings and live performances, Giddens has mined the history of the African American string band tradition, introducing new audiences to the black banjoists and fiddlers whose influences have been left out of popular narratives of the lineage of folk and country music.

She co-founded the Grammy award-winning string band Carolina Chocolate Drops and gained recognition as a solo artist during the Another Day, Another Time concert at New York City’s Town Hall in 2013. Giddens’s elegant, prodigious voice and fierce spirit are evident on her critically acclaimed solo debut, the Grammy-nominated album Tomorrow Is My Turn, which blends American musical genres like gospel, jazz, blues and country.

Her follow-up album Freedom Highway was released in February 2017 and includes nine original songs along with two civil rights-era songs, “Birmingham Sunday” and Staple Singers’ well-known “Freedom Highway,” from which the album takes its name.

Giddens has performed on The Late Show with Stephen Colbert, Austin City Limits, Later…with Jools Holland, and both CBS Saturday Morning and CBS Sunday Morning. In a program televised on PBS, she performed for former President Barack Obama and First Lady Michelle Obama at the White House, along with the late Aretha Franklin and Emmylou Harris.

The singer-songwriter studied opera at Oberlin College and Conservatory and received the BBC Radio 2 Folk Award for Singer of the Year. She also earned the Steve Martin Prize for Excellence in Bluegrass and Banjo in 2016. —By Ed Moorhouse