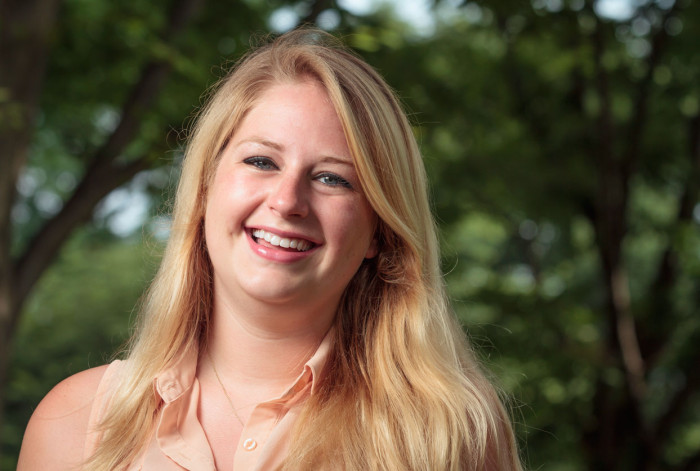 Manatees captured the imagination of Summer Fellow Xy Serafy after she encountered one at the beach with her family.
July 01, 2014

If it’s possible for any animal to be both lumbering and graceful, it is the buoyant and endearing manatee. Serafy, an Environmental Studies and Spanish dual major, will focus her research on the Antillean manatee, a subspecies that is working to survive in the coastal waters of Mexico.

This herbivore, that needs to breach the water’s surface to breathe every three to four minutes, has no natural predators except for people. With a current population estimated at less than 2,500, it is listed as endangered. Without effective conservation actions, and because of threats including habitat degradation and loss, hunting, accidental fishing-related mortality, pollution, and human disturbance the population of the Antillean manatee is predicted to decline by more than 20 percent over the next two generations.

“Manatees are sentinel creatures because they have no natural predators and an extremely resilient immune system, so a decline in their population can be a red flag that the ecosystem has been exposed to a high degree of pollution, agricultural runoff, or other indirect human activities,” says Serafy. “Therefore, if they do remain healthy, they represent a healthy ecosystem.

In addition to studying the impact of poaching, she will research legislation to protect the manatee and create a conservation plan as part of project.

The Antillean manatee is a close cousin to the Florida manatee, a group that has become a flagship species representative of exotic marine biodiversity.  In Florida, the animals have become a substantial keystone of tourism, but the manatees outside of the United States have not been as fortunate. Manatees everywhere are at risk for collisions with boats and loss of habitat. The Antillean manatee, is up against pollution and poaching, too.

Serafy’s summer research will consolidate all known literature about manatee conservation in Mexico. This includes papers published in the U.S. and—importantly—scientific and management literature published in Mexico.  “Xy’s goal for her Summer Fellows project is to assess the research and management landscape for manatee conservation in Mexico and draft a prospectus for her senior honors research, which she will conduct interdepartmentally, combining her majors in Environmental Studies and Spanish,” says Rich Wallace, Professor of Environmental Studies.

By the end of her senior year, she hopes to have produced an integrative honors thesis on the manatee’s conservation status in Mexico, the actions that have been taken to protect and support it, and strategies for its future. Her thesis will provide insights into research and management of manatees in Mexico that will help U.S.-based conservation organizations access information and materials that are little-known outside of Mexico, says Wallace. “Xy’s work will provide an important service to the global community of professionals concerned with the conservation of manatees and other members of the Sirenia family.”

Devil’s Pool: The Body In Relation to Self