The lagoons of Ocean City, N.J., surround waterfront homes where families enjoy spending time in – and on – the water.

“Many people learned how to swim in these lagoons and spent their childhood jumping off the ends of docks,” says Gasbarro. “But unlike the beaches on the ocean side of the island, the bay water is not monitored for swimming access. Regardless of whether or not lagoons are open for public swimming, people living on the lagoons will continue to swim and should know what’s in their water.” 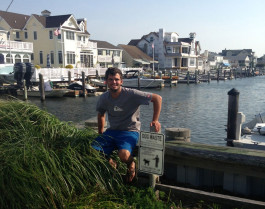 Michael GasbarroGasbarro, a rising senior, is measuring the levels of bacteria, dissolved oxygen, and water temperature in nine lagoons some of which are about 0.4 miles long and about 75 feet across which inhibits water circulation. He is comparing the measurements at the entrance of each lagoon to measurements at the halfway point along the length of the lagoon, and, also to the blind ends of the lagoons.

Areas with less water exchange generally have higher levels of bacteria than areas where there is good circulation, he says. In addition, storm water runoff is a source of water contamination and in rare circumstances can carry bacteria, viruses and other pathogens into the water where people with weakened immune systems could be at risk of getting sick if they go swimming.

Biology Professor Kate Goddard Doms is Gasbarro’s mentor for the research project. “The standard protocol is to test for harmless sewage bacteria because it is quick and relatively inexpensive,” she says. “If those harmless bacteria are found, it indicates that sewage or wildlife contamination may have occurred. Then further testing for harmful bacteria and viruses is done.  Right now we are just testing for the harmless bacteria.

Gasbarro guesses that contamination levels will be higher in dead-end lagoons because their design inhibits water exchange. “Storm water runs off directly into the ends of these lagoons,” he says. “I hope to show people how safe their water is for swimming, and if it isn’t safe, I hope to help take action to improve water quality in the lagoons.”