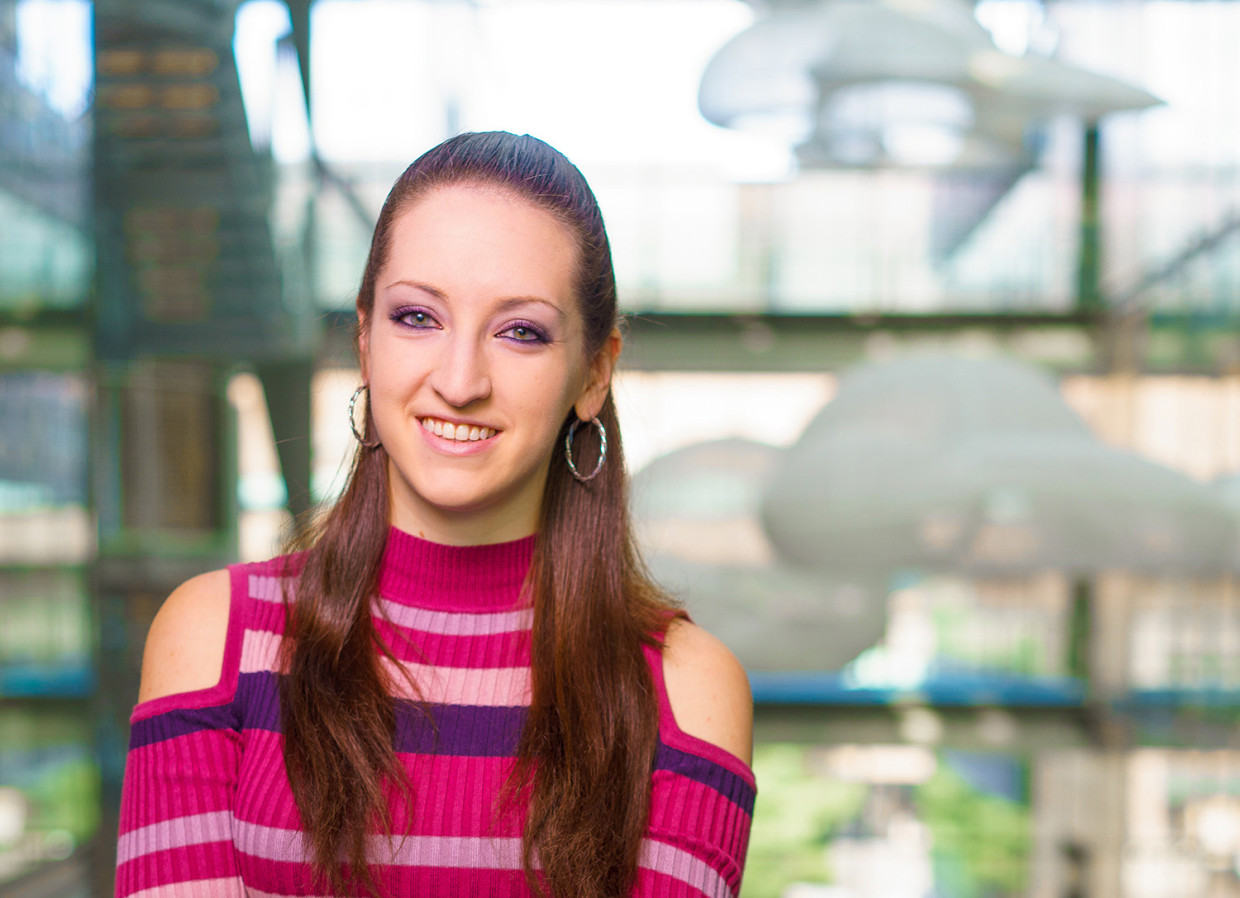 Getting to Know: Aubrey Paris ’15

This Ursinus graduate was recently chosen as one of the world’s 118 top young chemists by the International Union of Pure and Applied Chemistry (IUPAC).

Aubrey appears on its Periodic Table of Younger Chemists and is a National Science Foundation Graduate Research Fellow at Princeton, where she is pursuing her Ph.D.  She is a senior fellow for the Institute on Science for Global Policy (ISGP) and is a founding co-host of ISGP’s The Forum podcast.

Aside from your own, which podcasts to you enjoy listening to?

To be completely honest, I really don’t listen to many! Science Friday and Science Vs. are great science-related shows, and I definitely listen to them occasionally as inspiration for my
own podcast writing. I never received any formal training in podcasting, of course, so listening to those sorts of podcasts—ones that are both entertaining and educational— definitely helped me “learn on the job.” As a big baseball fan, though, the only other shows I listen to are podcasts that feature the San Francisco Giants coaches as guests.

Is there a podcast you would love to either guest host or appear on as a guest?

Princeton University—where I’m currently a graduate student— recently launched a podcast called She Roars. This show profiles female alumnae who have become influential powerhouses in their fields. I’d love to be a guest on that show one day—if I was ever lucky enough to be worthy of such a distinction! Also, this isn’t a podcast, but ever since it
premiered, I’ve wanted to be a guest or correspondent on the Netflix show Bill Nye Saves the World. The coolness of that should be self-explanatory!

You were an inaugural fellow of Ursinus’s Parlee Center for Science and the Common Good and you work at the intersection of of science and policy. What is the most significant thing from your Ursinus and experience you’ve carried with you as a Ph.D. candidate?

I attribute almost everything that I’m doing today to my time with the Parlee Center. Without my experience as a fellow, I never would have known that science policy could be a career path, nor would I have known that I liked it so much! But if I had to pick the most significant thing that I learned from Ursinus and CSCG that I still reflect on every day in my Ph.D. program, it’d probably be the importance of interdisciplinary thinking and communicating. It’s critical to be able to assess one’s specific research project in the context of a bigger picture, whether that be the broader field of chemistry, science in general, or society as a whole.

You were recognized on the Periodic Table of Younger Chemists as one of the 118 top young chemists around the world. How does it feel to be recognized like that?

It’s hard not to be humbled by my selection when I read the names, credentials, and  accomplishments of the other recipients. I interpret my selection as evidence that being a civically engaged scientist is something to be proud of and commended. This hasn’t always been the case. Academics have often been discouraged, whether formally or informally, from participating in the kind of extracurricular work that have made me unique as a scientist— things like science communication and science policy. But if someone like me, who  balances those activities alongside a full-time job as a graduate student, is being recognized as an outstanding chemist, then maybe that’s validation that scientists can and should feel free to explore these atypical fields, whether as extracurriculars or even careers.

What do you think is exciting about being a young scientist at this point in time?

It’s really easy to look at the world we live in today and be anxious or scared, with realities like worsening climate change, new food recalls every other week, and diseases we can barely pronounce. Fear is a perfectly reasonable reaction. Another reasonable reaction, though,  especially for young scientists like myself, is feeling like you can change the world despite those problems. The pressing challenges that we, as a society, face today will be solved tomorrow by scientists and engineers performing new research and translating that research into new technologies. As young scientists, we have the option to look at the glass half-full; we’ve been given an opportunity to use our science to have direct, meaningful impacts on society. I can’t think of something more exciting than that.


Do you have a favorite element on on the Periodic Table?

Ever since sixth grade, I’ve been fond of arsenic because I’m a big fan of Agatha Christie; arsenic is one of a few poisons employed regularly in her murder mysteries. Nowadays,  though, chromium is up there on the list because it’s a major component of the most exciting catalyst I’ve developed during my graduate studies.