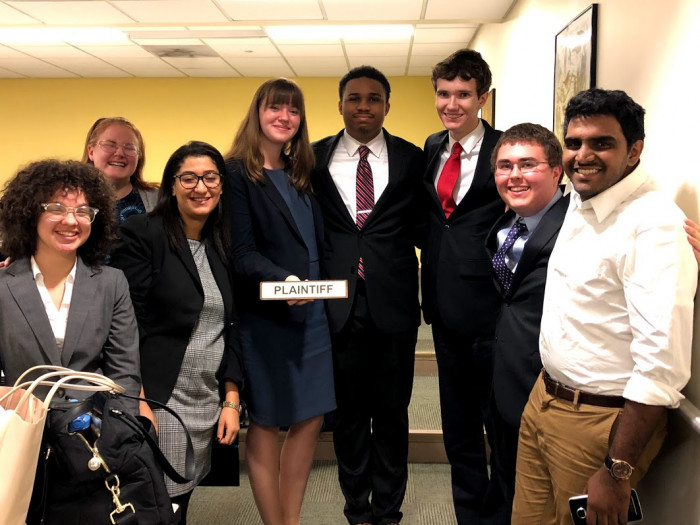 McTaggart received a high-scoring top attorney award and Palepu won a top witness award in addition to the entire team earning Spirit of AMTA honors as voted on by the other teams in the competition. They also earned a bid to attend the Opening Round Championship Series over other schools such as Harvard University, but are unable to attend due to scheduling conflicts. They plan to attend next year.

Ursinus students hone their trial advocacy skills through the pre-law program and are coached by Philadelphia attorney Alexandra Adams ’11. The team begins preparations in August when the AMTA releases the case problem for the year.

The case problem features a case law, statutes, fact patterns, affidavits from witnesses, expert reports, and depositions from the plaintiff and the defendant, Adams says. “We utilize this information to create a case theory for each side. I teach them the rules of evidence, trial procedure, persuasive public speaking, how to question witnesses, how to answer as a witness and more.”

Practice begins right at the start of the semester as Adams guides the team during internal and intercollegiate competitions. Each competition contains four rounds, two that allow participants to present their case as plaintiff and two as defense.

There are three students assigned to play attorneys and three are witnesses. The format includes opening statements, direct examinations and cross examinations, followed by a closing argument. Each round takes up to three hours to complete and is judged by practicing or retired attorneys and judges.

The team competed in the Opening Round Championships for the first time in Ursinus history in 2017.

The Ursinus Mock Trial team offers a great opportunity for students looking to expand their public speaking skills, are interested in law school, or in pursuing careers in the legal field.

Students interested in mock trial can email Adams at aadams@ursinus.edu. —By Mary Lobo ’15