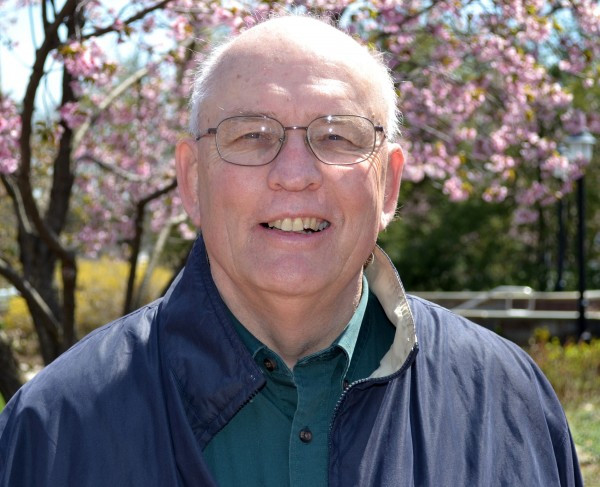 For over four decades, S. Ross Doughty was a pillar of the Ursinus community.  Young alumni recall their experiences inside and outside of the classroom with Dr. Doughty and the lasting impact he has on the the community.
June 03, 2019

Whenever somebody asks me what some of my favorite memories are about Ursinus, I always have the same answers: the staff and faculty and Wismer cookies. UC’s faculty and staff are dedicated to the students and each other and it shows. Professors and staff members alike take the time to get to know their students in every capacity – in the classroom, as RAs or athletes, as members of Greek life and more. Because of the close-knit community and smaller classes, students also often take classes with the same professor more than once. This itself speaks volumes about how much students enjoy Ursinus’s incredible faculty members. Places like Ursinus are only as strong as their foundation and when it comes to pillars of the community, Professor S. Ross Doughty ’68 was one of the best.

“Dr. Doughty was my freshman advisor. I wasn’t a history major, and I never took a class with him, but I held him in high esteem. From my very first day, he treated me with respect and took his role as my advisor seriously. He felt strongly that the mission of the college was to produce educated people, ready and equipped to put in the hard labor of pursuing truth. He had rare verve, took no half-measures, and genuinely loved teaching. I enjoyed my every interaction with him over my four years, and I will remember him with fondness and admiration.” – Ethan Wright ’15

Professor Doughty’s impact on the Ursinus community has always been immeasurable, especially when it came to students. For over four decades, he taught and mentored countless students in and out of the classroom, helping to shape them into who they are today. Not only did he have an incredible wealth of knowledge when it came to European history, military history, international politics, and world history, but he also played an integral role in mentoring faculty and helping to establish other programs such as the East Asian studies minor on campus.

“Dr. Doughty’s courses and expectations were character building. Personally, I was pushed outside of my comfort zone to be more vocal in class and elevate my writing skills. He cared deeply about his students by providing attention and direct personal feedback. Dr. Doughty’s high standards, coupled with his belief in my abilities, provided an opportunity for me to grow significantly. I am immensely proud of that growth, and to have been a history major. There is no one like him, and his influence made me a better person.” – Kelly Becker ’10

“Dr. Doughty was such an amazing inspiration and mentor during my time at Ursinus. I will never forget his passion for UC, history, and his students.  In addition to taking some of his classes, I had the great pleasure of working with Dr. Doughty on Academic Council as a student member, as well as working with him in my role as an Office Assistant in the Academic Dean’s Office. Every time I spoke with him, he pushed me to be the very best version of myself, and for that I am forever grateful.” – Nicole Cianciarulo Hoy ’14

Dr. Doughty never took himself too seriously and often taught without referencing his notes or the books. He was a laid-back professor who somehow had a way of intimidating you into doing your best work – even if you decided to take his Nazi Germany class as a second semester senior (I still don’t understand why I took that along with a Professor Hemphill class and my capstone at the end of my senior year…).

“After failing my first Doughty reading quiz, I showed up at office hours somewhat distraught and pretty much convinced that I was illiterate. Instead of brushing off my admittedly melodramatic reaction to a bad grade, he simply asked me to walk him through my reading process. In the 13+ years of formal education leading up to that moment, I hadn’t actually given this any consideration. The discussion that followed didn’t just help me figure out how to pass reading quizzes; it shaped my path as a student and my decision to pursue a career in academia. Professor Doughty didn’t just push his students to read immense amounts of material (though he definitely did do that)— he encouraged us to understand how we learn and to strive to meet his high expectations. There was also that time he threw chalk at a student because he gave a stupid answer to some question. But then he was really taken aback because he didn’t expect to actually hit him since I guess he had terrible aim or something?” – Julia Glauberman ’14

“I actually had Dr. Doughty as a professor my senior year. I was only a history minor, not a major, so I didn’t have the opportunity to have more classes with him. He was absolutely one of the most fascinating professors on campus. He barely looked at notes, he just knew so much about everything! It didn’t matter who you were either, if you expressed an interest in his class and you put in the effort, he would respect you. On my final paper for his class, he left some really wonderful comments for me about how hard I had worked, even though it was my senior year. I actually saved that paper with the comments, and when work gets tough, I look at it again to remind myself what I’m capable of. He was truly an amazing man, and Ursinus lost one of its greatest supporters and professors.” - Kirsten Biehl ’17

Losing such a valued member of the community is never easy, but Dr. Doughty’s legacy lives on through his students and colleagues. He has touched so many lives, motivated countless slackers, mentored numerous people, and was always determined to help his students in any way he could. Dr. Doughty will be remembered as an alumnus, professor, advisor, historian, and friend and his memory will surely continue to have an impact on the Ursinus campus for a long time to come.