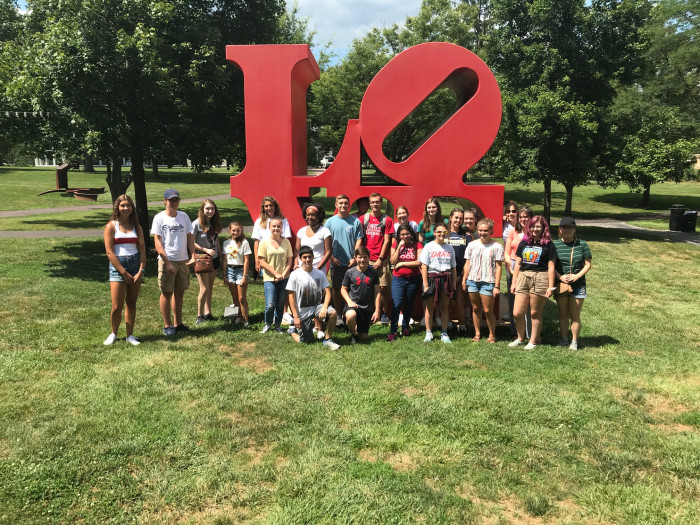 Students from Upper Perkiomen High School spent two weeks on the Ursinus College campus this summer taking an in-depth look at the U.S. constitution and other historical documents while becoming acquainted with a liberal arts education.
August 01, 2019

The inaugural Freedom, Citizenship and Equality summer program is funded by the Teagle Foundation for $165,000 over three years. The residential program aims to acquaint the high school students with college using Ursinus’s flagship Common Intellectual Experience (CIE) as a foundation.

During the two weeks, the 21 students participated in discussions that touched on political and ethical issues and had spirited debates surrounding of free speech and censorship.

“It’s nice to have the freedom to talk in an environment like this and express your own opinions,” said Robert Lynch, a senior at Upper Perkiomen. “That’s very different than a high school classroom and I like being able to have a discussion about these issues.”

The students were especially drawn to the inquiry-based discussions—much like an Ursinus student might find during CIE and as part of the college’s Quest: Open Questions Open Minds core curriculum. Laila Matos, a junior, was complimentary of the teaching style of Ursinus Professor of Politics Paul Stern, who co-led the program with Ellen Dawley, a professor of biology.

“He’s really good at guiding the conversation and allowing everyone a chance to give their own opinions,” Matos said.

“It forces you to think critically about the past and how it applies to the present,” said Emma Swift, a senior.

Following a weekend trip to the National Constitution Center in Philadelphia, the students spent one morning session discussing the Dred Scott decision, in which the U.S. Supreme Court ruled that Scott, a slave who had resided in a free state and territory where slavery was prohibited, was not entitled to his freedom; and that African Americans were not and could never be citizens of the United States.

What makes the program unique is that the students have the decision itself, as well as the constitution, at their fingertips. They’re pouring over the documents in order to have informed discussions in class.

During the discussion, which also included an analysis of the 1858 Illinois senatorial Lincoln-Douglas debate, Stern posed the question, “Is what’s right simply what a majority of people say is right, or is there something larger at play? Have any of you had an opinion that was opposite of public opinion?”

Some students spoke up and said yes, giving examples of personal experiences.

“Stand up for what you believe in. Spark a debate,” one student said.

Stern credits Talia Argondezzi, director of the writing and speaking program; Melissa Sanders Geiss, assistant dean of students and director of residence life; and the Office of Conferences and Special Events and director Maureen Cawley for helping to launch the program.

He says he hopes the program introduces the students to an inquiry-based education that prepares them to become informed individuals and responsible citizens.

“You should have no doubt that you’re ready for college—any college. You will do very well,” Stern told the students.