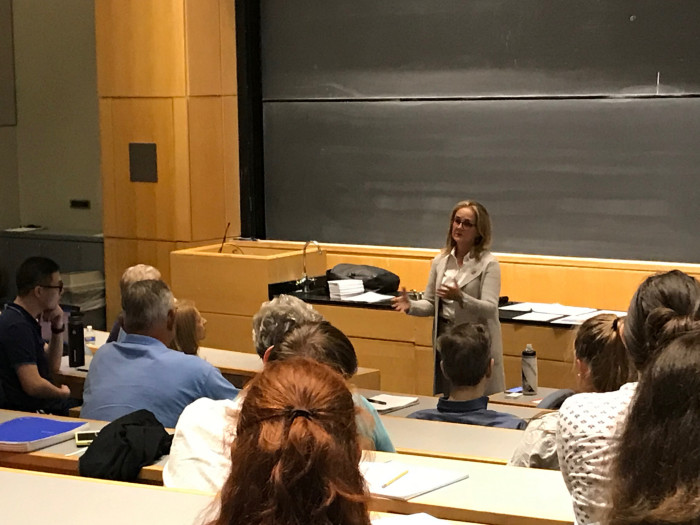 Ursinus students, faculty, staff and members of the neighboring community packed Musser Auditorium in Pfahler Hall during the first week of classes of the fall 2019 semester to chat with Madeleine Dean, a Democratic representative of Pennsylvania’s 4th congressional district, about environmental issues facing our country and region.
August 30, 2019

Dean represents most of Montgomery County, including Collegeville, and nearby areas in the U.S. House of Representatives.

“I love the energy of a college campus,” Rep. Dean said after being introduced by Richard Wallace, a professor of environmental studies.

Her talk and the question-and-answer segment that followed mostly focused on Dean’s legislative and policy initiatives concerning the environment, and she spoke about the Climate Action Now Act, which would “require the President to develop and update annually a plan for the United States to meet its nationally determined contribution under the Paris Agreement on climate change.”

In addition to fielding questions about environmental issues and environmental stewardship, Dean also talked about bipartisanship, as well as the historic 2018 election, of which she said, “I am honored to serve in the most diverse Congress in our history.”

On bipartisanship, she said, “I don’t want to be stuck on one side of the aisle. I look for opportunities to co-sponsor bills with Republicans and creatively some up to solutions for some of the problems we face.”

She also encouraged the students in the room—many of whom will be voting for the first time this year—to vote.

“Elections matter at every level,” she said.